Lockheed Martin delivered 142 F-35 fighters in 2021, as the programme continued to gain maturity.

The delivery number was up from 123 in 2020, when the coronavirus pandemic had more of an impact on production. The year’s 142 deliveries exceeded a previously identified target of between 132 and 139 jets, and also surpassed the 134 examples handed over in 2019. 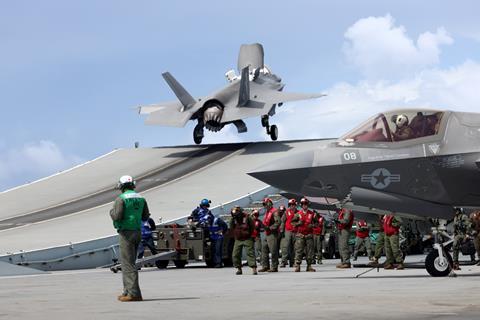 “Smart tools, connected machines and augmented realities all contribute to the delivery and sustainment of aircraft,” says Lockheed.

The company listed several programme milestones during 2021. These included campaign victories in fighter competitions held by Finland and Switzerland.

In addition, Denmark received its first F-35, and the Netherlands became the ninth nation to declare initial operational capability. The type also conducted a series of flight tests and appeared in several exercises.

“The F-35 joint enterprise team continues to provide unmatched combat capability to the 21st century battlespace through the F-35,” says Bridget Lauderdale, vice-president and general manager of the F-35 programme.

“Providing unparalleled support to the growing fleet, participating in numerous joint-all domain exercises and meeting our delivery target during a global pandemic is no small feat, while the F-35 was also chosen by Switzerland and Finland as their next fighter.”

The company adds that “some of the F-35A deployments and exercises demonstrated over 80% mission capable rates”.

The year also saw the first operational deployment of the US Navy’s F-35C aboard the aircraft carrier USS Carl Vinson, and the deployment of a joint air wing of Royal Air Force and US Marine Corps F-35Bs aboard HMS Queen Elizabeth.