The US Air Force (USAF) has added the first E-11A Battlefield Airborne Communications Node (BACN) aircraft from a 2021 order for the Bombardier G6000 derivative.

USAF took delivery of the aircraft on 15 September in Wichita, prior to its joining USAF’s BACN fleet at Hansom Air Force Base, Massachusetts on 19 September. It is the first of potentially six examples ordered in June 2021 under a contract worth up to $465 million. 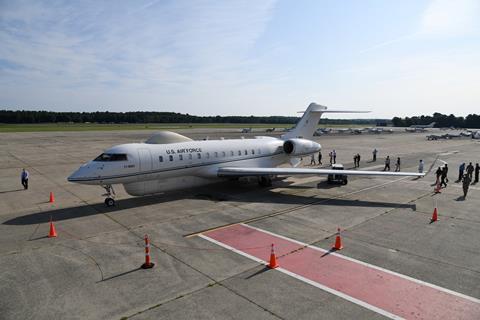 A Battlefield Airborne Communications Node-equipped E-11A aircraft rolls out on the flightline at Hanscom Air Force Base, Mass., in July 2018.

Modification work for the aircraft (21-9045) took place in Wichita, Kansas.

The 2021 contract saw USAF confirm the first three aircraft. The second aircraft from the order will arrive later this year, and the third in 2023.

USAF may obtain an additional example in both 2024 and 2025, adds Bombardier. Northrop Grumman provides integration, sustainment, and support for the BACN programme.

“BACN increases interoperability which results in forces that execute faster, more reliably, and with less risk to the warfighter. The delivery of 21-9045 is the pivotal first step to advancing the mission this program provides.”

One example, however, crashed in Afghanistan in January 2020. USAF Air Combat Command subsequently determined that the crew accidentally shut down the only operable engine following an engine failure.