The free flight test of the missile was the first time the US government has successfully launched a scramjet hypersonic vehicle since 2013, when the Boeing X-51 flew for 240s, the record for the longest air-breathing hypersonic flight. 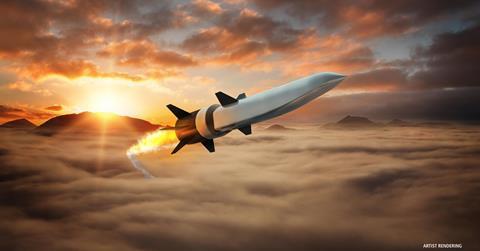 DARPA has yet to release a photo of HAWC, beyond artist renderings

In recent years, the US Department of Defense (DoD) has been in a hypersonic missile arms race with China and Russia. It has invested billions of dollars to fund numerous development efforts. Yet, it has struggled to show a functioning weapon.

DARPA did not reveal the length of HAWC’s flight, but said on 27 September that the missile met all primary test objectives. The research agency’s goals for the mission included successful vehicle integration and release sequence, safe separation from the launch aircraft, booster ignition and boost, booster separation and engine ignition, and cruise.

HAWC was developed in partnership with the US Air Force (USAF). The HAWC missile was built by Raytheon, while its scramjet engine was developed by Northrop Grumman.

Scramjets need a booster rocket to accelerate to Mach 5 – the definition of hypersonic speed – at which point the engine ignites and propels its cruise missile body on sustained hypersonic flight. Because scramjet engines have to ingest and then ignite air travelling at high speeds, the challenge of making the technology work has been compared to lighting a match in a hurricane.

It is that challenge of sustaining scramjet thrust that caused the Pentagon to focus on fielding boost-glide missiles first, a type of hypersonic vehicle thought to be easier to develop. Boost-glide hypersonic weapons are pushed high into the atmosphere by a booster rocket, much like an intercontinental ballistic missile. Then, the weapon glides back to earth at hypersonic speeds, until colliding with its target.

Despite being perceived as easier to develop, the DoD has also struggled with boost-glide missiles. The USAF’s AGM-183A Air-launched Rapid Response Weapon (ARRW) boost-glide hypersonic missile has twice failed to launch, once in April and once in July. Despite unsuccessful flight attempts, the service is eyeing limited production of ARRW in 2022.

Even if ARRW does get back on track and leap frogs the HAWC programme, the USAF is likely to continue to pursue both types. Scramjet missiles are seen as having advantages over boost-glide missiles.

“The HAWC vehicle operates best in oxygen-rich atmosphere, where speed and manoeuvrability make it difficult to detect in a timely way,” says DARPA. “It could strike targets much more quickly than subsonic missiles and has significant kinetic energy even without high explosives.”

Eventually, DARPA aims to transition the HAWC demonstration project into a programme of record with the USAF. Flight test data is intended to validate affordable system designs and manufacturing approaches for a follow-on production programme.