The US Air Force (USAF) has formally launched its search for a replacement for the Boeing E-3G Sentry Airborne Warning and Control System (AWACS). 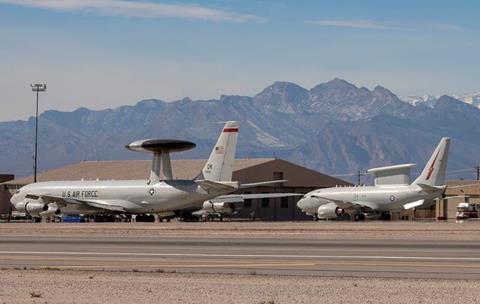 The USAF wants its next AWACS aircraft to provide command and control to its combat air forces. It is to carry a multi-mode airborne moving target indication radar, as well as line of sight and beyond line of sight communications equipment.

The USAF wants a “radar design that maintains a 360-degree (azimuth) surveillance picture and is able to perform airborne and maritime surveillance and tracking with variable revisit rates and variable track updates”. The service wants to be able to maintain that surveillance picture “while providing electronic steering to isolate targets of interest”.

To make sense of all of the information gathered by the AWACS’ radar, the USAF is interested in “sensor data processing, correlation, and fusion”.

The AWACS is to have a boom receptacle for in-flight refueling. It is also to carry an M-Code GPS.

The Sentry, the USAF’s current AWACS aircraft, is a Boeing 707-320 commercial airframe with a rotating radar dome on top. The aircraft is slow-moving, easy-to-spot on radar and the radio waves it emits also give away its position. The USAF has 31 examples of the E-3 in its fleet.

It is not clear how many AWACS aircraft the USAF wants to buy. Previously it has expressed interest in the E-7 because the aircraft is already in production and is being operated by several air forces.

The E-7 is based on the 737NG commercial airliner. It carries a fixed, fin-like Northrop Grumman AESA radar antenna atop its fuselage.