The unmanned air vehicles (UAV) are expected to be complete by August 2024, says the Department of Defense in a notice online on 2 April. 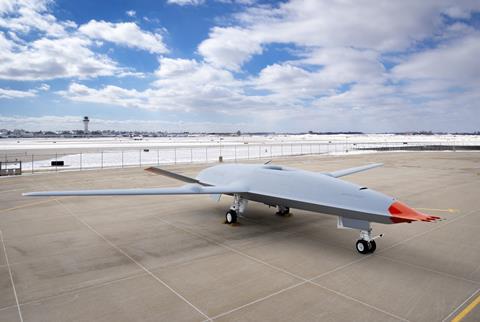 The three additional “demonstration test articles” bring the total number of aircraft Boeing is manufacturing in the MQ-25A programme to seven. The award was an option on the original four-aircraft contract, worth $805 million, which was awarded to Boeing in August 2018.

Boeing owns the first example of the MQ-25A, called T1. The UAV first flew in September 2019 and has since accumulated 30h in flight time.

Flight testing is paused on the MQ-25A at the moment as Boeing installs an aerial refueling store under the left wing of the T1 UAV. The company is doing tests on its own aircraft in order to gather data faster and prepare the aircraft to move quickly towards production. It has said it plans to start delivering engineering, manufacturing and development examples of the aircraft to the USN in 2021.