Recent aviation safety history records plenty of incidents where two – or more – heads in the cockpit were better than one when it came to averting disaster.

Chesley Sullenberger and first officer Jeff Skiles “worked as a team” to successfully ditch their stricken US Airways Airbus A320 on New York’s Hudson River in 2009. Richard de Crespigny was grateful for the presence of four other pilots – including two check captains – when the Qantas A380 he was commanding suffered uncontained engine failure in 2010. He wrote about how all played a crucial role in landing the jet safely. 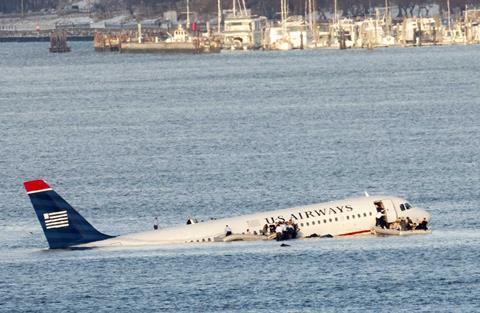 The “human factors” risk is the reason pilot unions oppose any move to change the long-established two-in-the-cockpit rule for commercial aviation. But the prospect of that edged closer in 2021, with the European Union Aviation Safety Agency (EASA) launching studies into whether a pilot could be removed for part of the flight or completely without compromising safety.

Earlier in the year, its executive director Patrick Ky had remarked that rules could be introduced “quite soon” to allow one crew member to remain at the controls during flight phases “when you don’t necessarily need two pilots”.

The emergence of the urban air mobility sector, not to mention driverless cars, has nudged the concept of autonomous transport higher up the agenda. In the military arena, remotely piloted air systems have been performing sophisticated tasks for more than two decades. Could developments in artificial intelligence and onboard computers in the civil arena make the co-pilot – and eventually perhaps the captain – redundant in the same way technology did away with the need for onboard radio operators, navigators and flight engineers?

From an economic point of view, as the industry recovers from the impact of Covid-19, airlines are certain to be looking afresh at driving efficiencies. 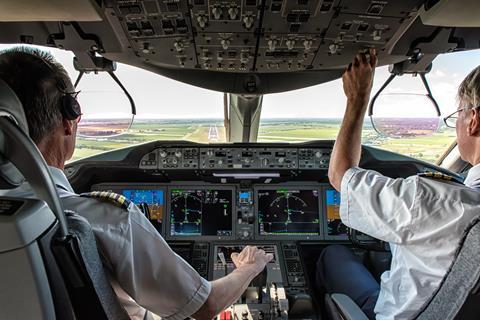 Although the pandemic took a terrible toll on the pilot community – with tens of thousands laid off, furloughed, or encouraged to retire at the peak of the crisis in 2020 – there are already signs that the sector could once again be facing a pilot shortage, forcing up salaries and the cost of training and recruitment.

During 2021, several US airlines blamed disruptions on a lack of available flightcrew as they raced to rebuild capacity.

Meanwhile, with the growth in e-commerce likely to boost demand for dedicated air cargo services over the next few years, some are suggesting that the next generation of widebody freighters could represent the perfect platforms to test the viability of single-pilot cockpits.

At last November’s Dubai air show, Airbus chief executive Guillaume Faury acknowledged that the arrival into service of the new A350F – scheduled for 2025 – could coincide with the roll-out of initiatives to test single-pilot operations, including EASA’s. 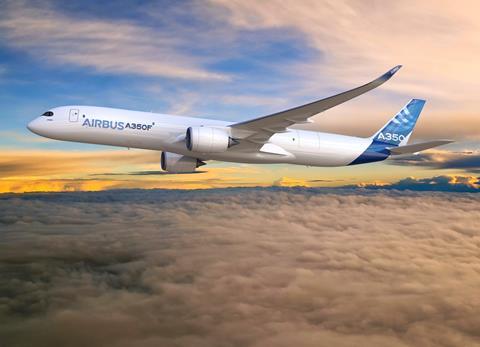 Airbus has launched its own studies into autonomous and “reduced crew operations”, or RCO, including what it dubs Project Connect, where it is partnering with a number of airlines, including Cathay Pacific. The manufacturer describes the initiative as an “enhanced, multi-crew operation [that] enables the crew to better organise their presence in the cockpit during cruise phase. Pilots can thus achieve a better balance between working and resting time, optimise fatigue management on long-range flights, and concentrate on the most strategic tasks to enhance safety.”

The Hong Kong carrier is keen to stress that the project is a “long term commitment… that is still very much in its conceptual stage”. It adds: “Our top priority for the immediate future is to manage our operation and recovery under the Covid-19 environment. To achieve this, we need to maximise our fleet and pilot productivity using current regulations and crew complements. All of the aircraft in our existing fleet are certified to operate with a minimum of two pilots on board, and there is no plan to reduce that number, even if the RCO concept is approved and introduced in the future.”

EASA in November published details of two studies it plans to carry out into reduced crew rules – it aims to award contracts for research around April 2022.

The first – for extended minimum-crew operations, or eMCOs, under which flight times can be increased by allowing one pilot to rest during less-intense phases of the flight, with support from ground-based controllers – sets 2025 as a possible implementation date. The second – for single-pilot operations, or SiPOs – will examine whether entire flights could be operated by one member of flightcrew from the early 2030s.

EASA says technological advances, including the development of autonomous unmanned aircraft, “bearing the potential for safety and efficiency gains”, mean the timing is right to “explore the technical and regulatory feasibility of further reducing the number of pilots aboard commercial air transport aircraft”. It also says it has been approached by aircraft manufacturers, which are “confident” that cases can be made for taking such steps “while maintaining the current safety level in passenger air transport”.

However, the agency insists that any proposals to reduce the two-pilot requirement “requires a robust assessment of the safety impact at all levels” and that is why it is initiating the independent research. The project’s objective, notes EASA, is to “develop a reference risk-assessment framework and knowledge base for the characterisation and impact of the changes raised by the application of the eMCO and SiPO operational concepts on the safety of flight operations, with a focus on the analysis of human factors… such as sleep inertia, fatigue risk management, or pilot incapacitation”.

UK pilot union BALPA is unconvinced about the efforts, accusing Airbus of “approaching it as a technological challenge, but not seeing it as a human challenge”. Says its general secretary Martin Chalk: “Eventually technology will eradicate the need for pilots altogether, but technology cannot at this point reduce the value of having a second pilot. There is a real divide between those who have flown any kind of long-haul service and those who see proposals such as these as sensible. It is not a Venn diagram.”

Fatigue is the main problem on long-haul, and the possibility that rules preventing one pilot leaving the cockpit for a rest might change first for cargo operations makes no difference, maintains Chalk. “You might be on a flight through the night, with all the challenges of jet lag and feeling jaded. You need someone to talk to,” he says. “When you fly over mountains, conflict zones, areas with patchy air traffic control, all require contingencies. If you are relying on someone on the ground, you might as well have them next to you. The human factors bit just hasn’t been thought through.” 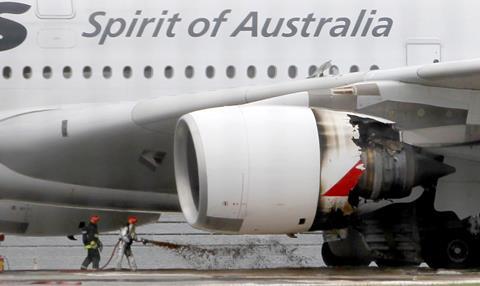 Five Qantas pilots were in A380 cockpit during engine failure

The European Cockpit Association (ECA) too is sceptical. “How do you enhance safety by taking someone out?” asks Tanja Harter, executive director for technical affairs. She uses the example of how if automation can eliminate the need for third and fourth members of a flightcrew, why not the second? “The difference is the navigator and flight engineer had a set job. With two pilots, everything is shared,” she says. “Before almost every decision a second opinion is sought. We are all prone to human error, and if one pilot is removed, there is no-one to catch it.”

A paper responding to the EASA studies from the Brussels-based ECA notes that “in the last 10 to 15 years we have seen cases where technology has compromised safety, and only the co-ordinated work of [two or more pilots] saved the day”. If technology is currently available to make the job of one pilot redundant, “why is this not made available to be implemented within the two-pilot cockpit and thereby enhance safety even more?” it asks, suggesting that, until automation can achieve a higher level of safety than that provided by two pilots, downsizing the cockpit “should not be considered”.

The ECA acknowledges that “computers can do certain things better than humans, but they are only as good as their system design”. It adds: “While humans may introduce some failure scenarios, they at the same time eliminate system-failure scenarios and act as a critical on-board back-up for failed systems, bridge technology gaps, and adapt in real time and in the real environment to non-anticipated situations. Whether an automated system can adequately compensate for this is highly questionable.”

What safeguards there would be if a pilot becomes suddenly incapacitated is another concern of the ECA. While a resting crew member could be called back to the cockpit in an emergency under the eMCO scenario, with SiPO the only fall back would be an automated landing system that could be engaged by the ailing pilot, or remotely by a colleague at a ground station. While cockpit-activated avionics products such as Garmin’s Autoland are available in the general aviation sector, the technology required to reliably re-route and land a commercial jet is still some way away.

For BALPA’s Chalk, another danger of removing a pilot from the flightdeck is a repeat of the Germanwings tragedy, where a first officer locked his colleague from the cockpit and deliberately flew the aircraft into a mountain. After that crash, EASA brought in guidance around cockpit occupancy, but for Chalk a benefit of having two pilots is “that opportunity to spot something early, whether it is a mental health issue or a terrorist insider threat”. He adds: “During those low workload periods is exactly when you get a chance to chat with your colleagues.” 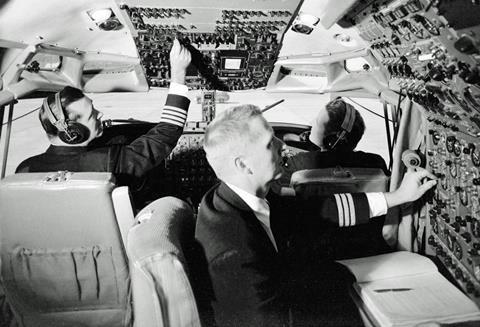 The 707’s flightcrew also included a flight engineer and navigator

Chalk also brings up Stanislav Petrov as an example from outside aviation where a human using his initiative was able to over-ride “tight automation” to prevent a disaster – in fact, a potential apocalypse. Petrov was senior duty officer at the Soviet Union’s command centre one day in 1983 when a malfunctioning satellite-based early warning system reported that the USA had launched a series of nuclear missiles. Based on a gut feeling that it was almost certainly a false alarm, Petrov disobeyed strict military protocol and refused to order a retaliatory strike.

Mark Millam, vice-president technical programmes at the Flight Safety Foundation, says it is difficult to forecast how quickly technology would have to evolve to make single-pilot operations feasible. “You have to think about all the functions that might have to be automated, how a human interfaces with the machine, body language, non-verbal cues,” he says. “What a human does best is anticipating what will happen. Can a computer do that reliably? It cannot right now, but at some point in the future it’s certainly possible.”

For single-pilot operations, and eventually fully-automated cockpits to become reality on passenger airliners, industry needs to come up with technology that regulators deem safe and reliable, and that pilots’ unions are prepared to accept.

But the final arbiter could be public opinion. We routinely use machines today that once were unimaginable without a human operator, from lifts in hotels to automated grocery check-outs. Few of us would give a second thought to boarding a tram or a fairground ride that is controlled remotely.

However, many believe that it will be a long time before we accept automation at 30,000ft sufficient to make professionals redundant. Such has been the obsession with safety over the decades that removing one or both pilots from the cockpit would necessitate a cultural sea-change in the way the industry itself views risk. It might also require a leap of faith on the part of the travelling public.