The US Army has selected Textron subsidiary Bell to produce its next generation assault helicopter.

Officially dubbed the Future Long Range Assault Aircraft (FLRAA), the platform is intended to replace the army’s current fleet of Sikorsky UH-60 Black Hawks, which numbers more than 2,300 airframes according to Cirium data. 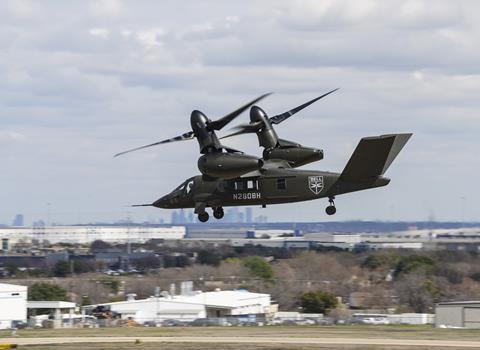 Lockheed Martin subsidiary Sikorsky had sought to maintain its massive aircraft business with the army by competing, jointly with Boeing, with the Defiant X coxial design for FLRAA.

However the army’s Future Vertical Lift team, which is managing a portfolio of several aviation-related procurement programmes, opted for the V-280 Valor over the Sikorsky design.

“Bell has a long history supporting Army Aviation and we are ready to equip soldiers with the speed and range they need to compete and win using the most mature, reliable, and affordable high-performance long-range assault weapon system in the world,” says Bell chief executive Mitch Snyder, following the decision.

Sikorsky now has three days to request a briefing from army officials, covering how they reached the decision. They will then have the option to file an appeal, known officially as a protest, and seek to have the army’s choice overturned.

Such a review would be conducted by the independent Government Accountability Office, which is not part of the Department of Defense.

“We remain confident Defiant X is the transformational aircraft the US Army requires to accomplish its complex missions today and well into the future,” Sikorsky and Boeing say in a joint statement. “We will evaluate our next steps after reviewing feedback from the army.”

The army launched the FLRAA competition in 2019, seeking to dramatically increase the range, speed and overall survivability of its primary troop carrying helicopter, the UH-60, which has been on active service for more than four decades.

“This down-select represents a strategic pivot for Army Aviation to the transformational speed and range our Army needs to dominate future battlefields,” says Major General Walter Rugen, director of the FVL cross-functional team. “The prototyping and risk-reduction efforts allowed the Army to significantly reduce the time needed to get to today’s announcement.”

The army says FLRAA will extend the reach of air assault missions and enable ground forces to “converge through decentralised operations at extended distances”.

“FLRAA’s inherent reach and stand-off capabilities will ensure mission success through tactical manoeuvre at operational and strategic distances,” the service says in announcing its choice of the V-280. 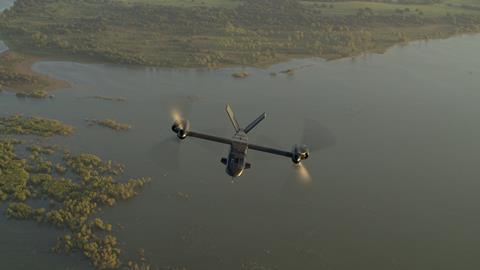 If the US Army’s choice stands, the service will join the US Marine Corps and US Air Force in operating a tiltrotor aircraft

Rugen has stated publicly that initial evidence gathered from the ongoing Russo-Ukraine war validates the army’s strategic emphasis on speed and survivability of aircraft.

“Low and fast matter,” he noted at an August event in Washington DC.

Bell says the initial FLRAA contract will refine “weapon system design, sustainment, digital enterprise, manufacturing, systems integration, flight-testing, and airworthiness qualification” through the production of a virtual prototype, rather than an actual aircraft.

That initial contract is worth some $232 million. However, the entire programme will be worth tens of billions of dollars for Bell over the coming decades.

Officers within FVL note the army capitalises its aviation fleets on a roughly 50-year time scale, providing the winner a secure stream of business for many years.

A separate FVL competition known as the Future Attack Reconnaissance Aircraft (FARA) to replace the retired Bell OH-58 Kiowa is also underway. Bell and Sikorsky are the two finalists in that bid as well.