The existence of a two-year-old project to develop a new air-to-air missile capable of intercepting targets at great distances has emerged in US budget documents.

The Office of the Secretary Defense (OSD) launched a two-year engineering assessment of a new long-range engagement weapon (LREW) designed with the goal of “maintaining air dominance”, according to budget documents released last March.

Analyses of the design, engineering and kill chain requirements were expected to be complete in the last fiscal year, although details are classified. “When successful, LREW will transition to multiple services,” the documents show. 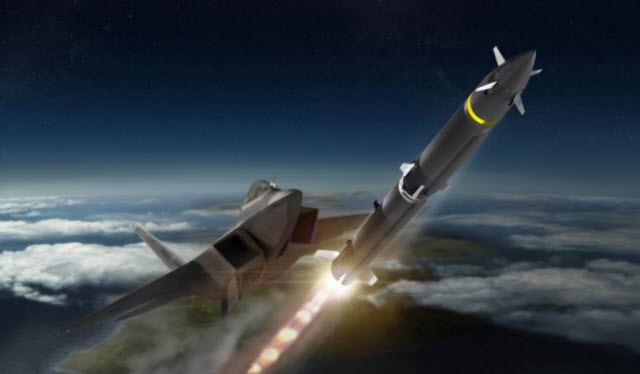 Photo: US Department of Defense

Though funded for more than two years, the LREW project had escaped notice in an obscure budget line item for an OSD account named “emerging capabilities technology development”, which is mostly reserved for small electronic warfare projects.

But the programme offers the first indication that the US military is interested in a new missile to replace or surpass the capabilities of the Raytheon AIM-120D AMRAAM.

An unclassified concept image of the LREW was published last April in a presentation by Chuck Perkins, the principal deputy to the assistant secretary of defense for research and engineering.

The image in Perkins’ presentation may not reflect the classified version of the LREW concept, but depicts a large, two-stage missile launched from an internal weapons bay of a Lockheed Martin F-22.

The LREW also emerges as Chinese and Russian militaries reportedly are pursuing new air intercept missiles with ranges significantly longer than the AIM-120D. The range of the AIM-120D is classified, but is thought to extend to about 100mi (160km).

(UPDATE: The original article was updated with an unclassified image of the LREW concept and a description of that image.)