The search for a missing Malaysia Airlines Boeing 777-200ER in the southern Indian Ocean has covered over 80,000 square kilometres, and is likely wind up in June 2016 if the aircraft is not found.

The Fugro Discovery is using deep tow equipment and will depart the search zone around 6 January. She will be replaced by Fugro Equator, which is in Fremantle to re-supply and undergo engine maintenance, prior to departing for the search area on 29 December. 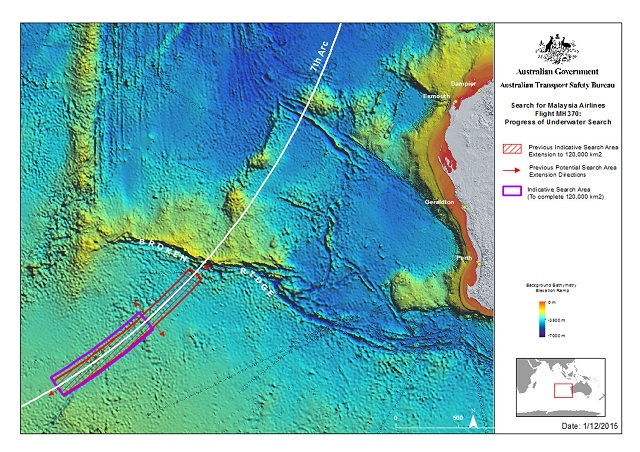 The arrival of summer in the Southern hemisphere is expected to aid the search in the coming months.

“Consistent with the undertaking given by the Governments of Australia, Malaysia and the People's Republic of China earlier this year, 120,000 square kilometres will be thoroughly searched,” says the JAAC. “It is anticipated this will be completed around June 2016.”

In what is arguably the greatest mystery in aviation history, flight MH370 disappeared in the southern Indian Ocean on

Only forensic analysis of primary radar data and satellite handshakes led to the confirmation that the aircraft’s final resting place is in the southern reaches of the Indian Ocean. There were 227 passengers and 12 crew aboard the aircraft, registered 9M-

The only physical trace of the aircraft to be discovered is a flaperon that washed up on France’s Reunion Island in July, thousands of miles from the aircraft’s probable crash site.