Some 25 years after the fall of communism, Russia’s aviation industry remains globally competitive in fixed-wing combat aircraft and military helicopters. But despite more than two decades of investment and dedication, its once-mighty airliner industry is, at best, a global afterthought, ranking far below post-Cold War upstarts in Brazil and Canada.

The long-delayed arrival of the Sukhoi Superjet in 2011 did little to break that dynamic, even though the aircraft was technologically equivalent to rivals from Embraer and Bombardier. A broken production system has limited Sukhoi Civil Aircraft to delivering around 100 Superjets in the five years since service entry.

On 8 June, Irkut unveiled Russia’s next best hope for a commercial revival. Technologically, the MC-21-300 looks every bit the worthy global competitor. With lightweight composite wings, fuel-sipping Pratt & Whitney geared turbofan engines (one of two available options), a full fly-by-wire system and a slightly wider cabin than the Airbus A320, the 180-seat MC-21-300 or 150-seat MC-21-200 have no obvious performance shortfalls in the global market. 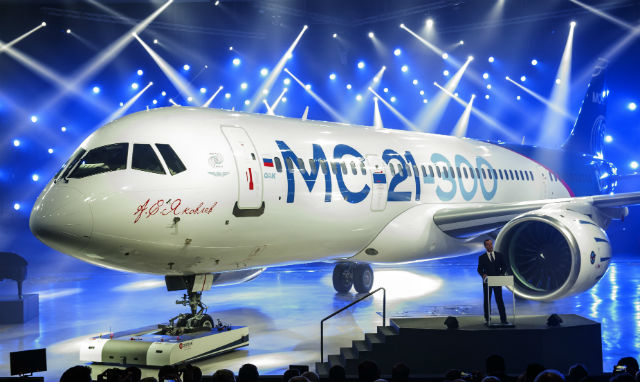 Indeed, if Boeing is still looking for an interim 240-seater to offer between the 737 Max 9 and 787-8, the still-unlaunched member of the Irkut family, the MC-21-400, should fit the bill nicely.

But it stretches the definition of optimism to imagine that Irkut will be regularly stealing single-aisle deals from John Leahy’s staff in Toulouse or John Wojick’s sales team in Seattle.

Irkut seems to have no illusions of conquering the global single-aisle market. Known primarily as the manufacturer of Sukhoi fighters and Yakovlev trainers, the East Siberian factory for the MC-21 is currently sized to assemble up to 72 aircraft a year at peak rates: only 12 more than the planned monthly output for the A320 and 737 families.

Nor does matching the rates of the Airbus-Boeing duopoly seem to be the priority for the Russian government, which is perhaps the project’s strongest supporter. No national political figures appeared at equivalent roll-out events earlier this year for the 737 Max and Embraer 190-E2, but the star of the show in Irkutsk was prime minister Dmitry Medvedev.

The MC-21 is very much a political beat, but – by coincidence, it seems – it also is worthy on paper of global attention. Perhaps in a market not distorted by the dominating duopoly of Airbus and Boeing, the MC-21 might gain the respect it deserves.