With quick reaction alert sorties now occurring on a daily basis and the government in Stockholm demanding increased operational readiness, the Swedish air force is no longer feeling generous about sparing some of its Saab Gripens to support export customers.

Speaking in Paris on the eve of the show opening, air force chief Maj Gen Micael Bydén noted that his service had agreed to release eight Gripen C fighters and three D-model trainers to provide an interim solution for Switzerland, ahead of its expected introduction of 22 Gripen Es. That deal did not progress, however, due to a public referendum.

“That was two years ago – now I will not sign the paper saying that I will allow 11 aircraft out of my inventory. That would have a negative impact; we need them,” Bydén says. “I was more generous two years ago than I am today.” 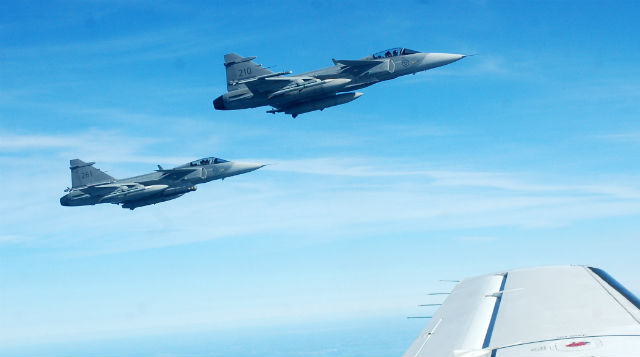 More than 400 quick reaction alert flights were launched from Sweden last year, and the government wants all six Gripen units – currently including two dedicated to training – to be fully operational by later this decade, meaning a fleet of almost 100 examples.

Discussions between the Swedish government’s FXM defence export agency and the Brazilian government are continuing with regard to providing a bridging capability, prior to the latter’s introduction of the Gripen NG from late this decade.

Bydén declines to speculate on how many Gripens his service could let go, but Saab chief executive Håkan Buskhe says the company can manage the situation.

“We can deliver new aircraft in 18 months – it’s not a problem,” he says. Sweden also has a stock of stored A/B-model Gripens, which could be swiftly upgraded to the C/D configuration.

While Saab is not exhibiting at the show, Bydén will be meeting his Brazilian counterpart and the air chiefs of fellow Gripen operator nations in Paris this week. “We are trying to find ways to be better,” he says of the cooperation between users Sweden, the Czech Republic, Hungary, South Africa and Thailand.