The Australian Transport Safety Bureau (ATSB) and Malaysia’s Department of Civil Aviation (DCA) have sent a large piece of aircraft debris found in Tanzania to Canberra for further examination, as the search for the missing Boeing 777-200ER that operated Malaysia Airlines flight MH370 grinds on.

Both the ATSB and DCA said the debris was found by locals on Pemba Island on 23 June.

Previous pieces of debris that have been identified as consistent with the missing airliner have also been examined at Canberra by ATSB officials, in consultation with Malaysia Airlines, Boeing and certain component manufacturers. 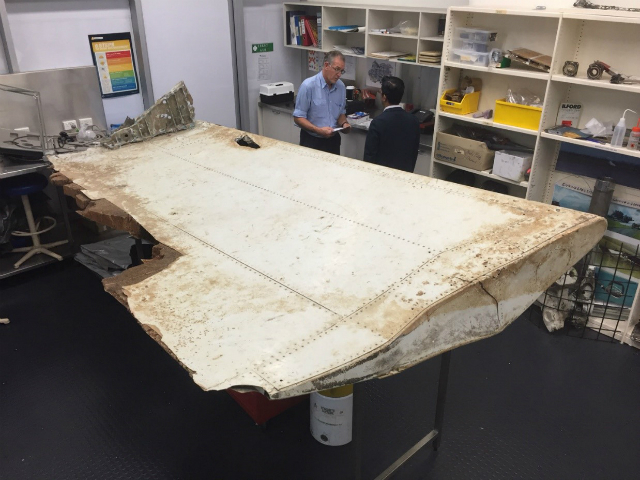 In its 20 July update, the Joint Agency Coordination Centre (JACC) says that the item is believed to be an outboard wing flap, and investigators are working to ascertain if the item came from a Malaysia Airlines Boeing 777.

It goes on to say that the underwater search for the 777 in the southern Indian Ocean continues and that a second ship, the Fugro Equator, is expected to depart for the search area on 20 July. A third ship, the Dong Hai Jiu 101, is currently on weather standby.

The Centre adds that ongoing poor weather conditions have severely impacted search operations, and resulted in delays of between six and eight weeks.

“In the event of further poor weather, or delays as a result of unforeseeable problems such as equipment failure or crew incapacity, searching the entire 120,000 square kilometre search area may continue well beyond the winter months,” it adds.

More than 110,000 square kilometres of the search area have been already covered in the search for the aircraft, which has been missing since 8 March 2014.

"In the absence of credible new information that leads to the identification of a specific location of the aircraft, Governments have agreed that there will be no further expansion of the search area," the JACC adds.