Bombardier has disclosed details of the minimum-unstick testing on the initial CSeries variant which it conducted at a regional airport in Kansas.

One of the CS100 prototypes, FTV4, performed the tests at Salina airport during May.

The twinjet was fitted with a projecting bumper underneath the aft fuselage for the tests, which explore the minimum speed at which the CS100 can lift off at high nose attitude.

FTV4 project flight-test engineer Allan Smith says the test is “one of the most dangerous” because it requires the bumper to make contact with the runway surface as the aircraft accelerates. 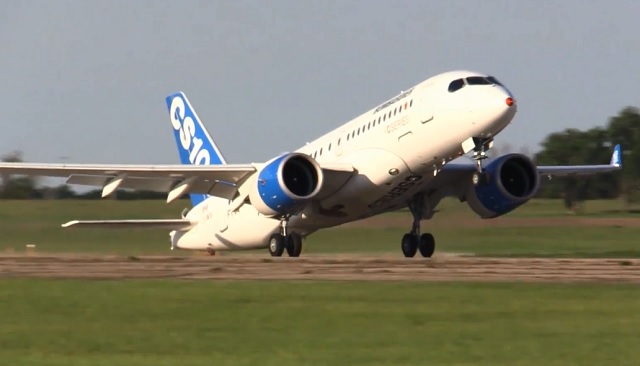 FTV4 has been fitted with cameras underneath the fuselage to monitor the bumper and the exercise also required simulation and modelling before being carried out.

Video footage from the cameras, dated 21 May, indicates the aircraft lifting off during one of the tests at a speed of just over 100kt, with a nose-up pitch of around 13°.

Smith states that the meteorological criteria are “stringent”, allowing no more than a 5kt crosswind and 10kt wind overall. Salina’s primary runway, designated 17/35, has a length of 12,300ft (3,750m).

Bombardier confirms that it has completed the minimum-unstick test regime with the type.