Putting the Airbus A350-1000 through its paces during this week’s flying display is a ­Farnborough veteran making his last appearance before retiring this summer.

Peter Chandler, who is Airbus’s senior experimental test pilot and in recent years chief test pilot, retires in August after a stellar flying career that began in the Royal Air Force four decades ago and has encompassed test-flying aeronautical hardware ranging from the Goodyear blimp and Lockheed C-5 Galaxy to Vought A-7 Corsair and Airbus A380.

During his career, Chandler has accumulated over 13,200 flying hours and made many Farnborough demonstrations. Notable appearances include showing off the Panavia Tornado GR1 in 1986 as the RAF’s solo display pilot to leading a Red Arrows “Vic formation” across the airfield 20 years later in the A380.

Chandler’s love of aviation began during his school days, when he ­managed to get some back-seat time in de Havilland Canada Chipmunks with the RAF cadets. He went on to study aeronautical engineering at Southampton University with a view to going into the engineering and design side of the aerospace industry. 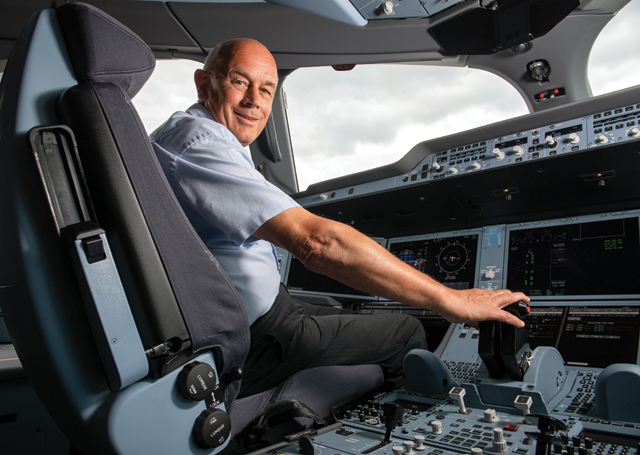 He continued to pursue his love of flying through membership of the University Air Squadron (UAS) at Hamble airfield where he says he probably “spent far too much time flying Chipmunks and not enough time studying!”.

He recalls: “When I was in the UAS ­I did reasonably well at flying and was encouraged to apply to the Air Force. So I went straight from graduating to RAF Cranwell.”

And so began an almost 20-year ­career flying fast jets, starting with training on the Hunting Jet Provost and Folland Gnat (at RAF Valley), followed by the Hawker Hunter.

“I then went to RAF Honington to fly the Buccaneer in 1977,” he says. After completing the operational conversion unit course, Chandler spent four years on 12 Sqn, mainly at Honington and latterly at RAF Lossiemouth.

“I then got picked up for the Tornado GR1 and was on the first conversion course to form the first Tornado squadron, which was then 9 Sqn,” says Chandler. “So I was back at Honington again for the next several years.”

While flying the Tornado, Chandler became an instructor on the weapons conversion unit and was selected to be the solo display pilot during the 1986 season. This was when he began a lasting association with Farnborough which had a memorable first appearance.

“Doing my Tornado displays around the country, my authorisation was ‘not below 100ft’ and there wasn’t really a speed limit apart from ‘don’t drop a boom’. So we’d aim to get as close to 600kt as we could on the last run then pull up in a vertical climb to 15,000-20,000ft.”

Chandler says that height constraints around the Farnborough boundaries made the manoeuvring more difficult “but we managed to get it down close to 100ft and going jolly fast”.

After his first Farnborough display, Chandler was summoned by the Grp Capt who headed the flying display committee for what he thought would be a telling off.

“The Grp Capt told me that I’d not actually done anything wrong, but I’d scared the wits out of his secretary, who had been sitting in the tower close to the display line, so would I please go and apologise to her!”

After completing the 1986 display season Chandler joined the Tri-National Tornado Training Establishment at RAF Cottesmore for a two-year tour where he headed the UK training squadron.

“I then declined an offer of a career in the air force involving lots of ground tours, and applied to do the test-pilot school,” he says.

Chandler did a year at Edwards Air Force Base in California, attending the US Air Force Test Pilot School in 1989, where he primarily flew the McDonnell Douglas F-4, the Northrop T-38 and the A-7.

“Almost every week we had a guest aeroplane – everything from F-15s and F-18s to C-5s and even the Goodyear blimp, which was quite an eye-­opener,” he says. “I remember being told when you’re taxiing the C-5, look at the ground speed read because otherwise you’ll end up doing 40kt and you won’t think you’re even moving.”

This advice would prove useful in his future career testing the A380.

Five years followed at the UK Empire Test Pilot’s School at Boscombe Down where Chandler flew a variety of types. His time there included three years as an instructor and latterly as the principal tutor on the fixed-wing course.

Civvy street beckoned in 1994 when Chandler joined Virgin Atlantic and spent the next six years flying the airline’s Airbus A340s, during which time he participated in project work with Airbus. This saw Chandler start spending time in Toulouse, initially working with Airbus on navigation and communications systems and later on the development of the A340-600, for which Virgin was launch customer.

In 2000 Chandler accepted a job offer to join Airbus’s flight-test team, a move that would ultimately lead to a five-year stint as its chief test pilot.

“Within a few months of arriving I was deputy project pilot for the A380, working with Jacques Rosay, who was chief pilot and a fantastic guy to work with,” says Chandler. Sadly Rosay passed away three years ago after a battle with cancer.

“Between the two of us – with help from a lot of others – we pretty much carried out the whole revamp of the [Airbus] cockpit, which ended up being the A380 cockpit,” he says.

Chandler undertook much of the A380 flight-test programme and as that work concluded he got stuck into the design of the A350 cockpit.

When Rosay became ill, Chandler replaced him as chief test pilot and was the third Brit to hold the post after Nick Warner and Bill Wainwright. This saw him lead the flight-test programme for the A350, culminating in him commanding its first flight on 14 June 2013.

“This was a real highlight of my Airbus career – every test pilot’s dream is to do a first flight of a new prototype. And on the third flight a week later, we got clearance to a flyby at the Paris air show,” he recalls.

After a lengthy career in flight-test management, Chandler stood down as chief test pilot in December 2015 as he wanted “to slow down a bit before retirement”. He has spent the last two and a half years as senior experimental test pilot and has continued to be very much involved in Airbus flight-testing and design work. Looking back, Chandler says it is the latter part of his career that has provided the most satisfaction.

After his August retirement, Chandler and his wife Kate plan to spend their time living in France and the UK as well as travelling and enjoying their boat on the Canal Du Midi. Flying, he says, may still be on his agenda “but not until I get bored with all of that!”.