South African investigators have disclosed that a CemAir Bombardier CRJ200 crew departed from George airport before the control tower opened, despite being aware of an inbound Airlink Embraer ERJ-135 on approach to the same runway from the opposite direction.

Preliminary inquiries into the 23 August incident – classified as serious by the South African Civil Aviation Authority – have found that the airport’s tower and approach control centres opened at different times, 15min apart.

“The rational as to why the two stations opened at different times could not be determined with certainty but posed a serious safety implication on the operations at the aerodrome,” the inquiry states, pointing out that the outbound CemAir service, to Johannesburg, and the inbound Airlink flight from Cape Town were scheduled to be operating at George around the same time.

According to the inquiry the departing CRJ200 crew was “well aware” of NOTAM information listing the differing tower and approach opening times. 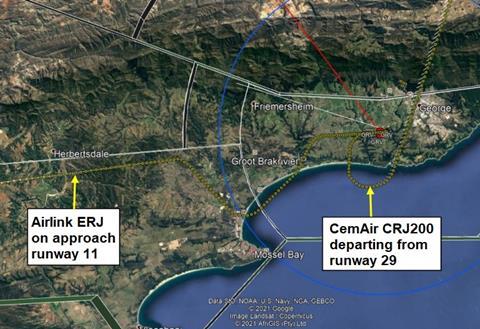 As the CRJ200 taxied for runway 29, its crew was called by approach control and informed that the tower frequency would be opening within 2min and that there was an aircraft inbound for the opposite-direction runway 11 within the next 7min.

But despite being instructed to hold position the CRJ’s captain replied that the flight was ready for an immediate departure and would follow the unmanned procedure to take off from runway 29, and turn left over the sea. The captain broadcast an advisory on this departure over the approach frequency.

“[The CemAir crew] did not wait for the tower to open even after they were informed by approach control of the situation with [the Airlink flight],” says the inquiry.

After learning that the CemAir aircraft was rolling for take-off – about the same time as the tower opened – approach controllers told the Airlink flight to stop its descent at 8,000ft, and turned the aircraft to the south, off its approach path, instructing it to descend while the CemAir jet climbed away. The Airlink crew was then cleared to re-align for a visual approach to runway 11.

Investigators have yet to reach formal conclusions on the incident. None of the 41 occupants on board the CRJ200 or the 31 on the ERJ-135 was injured.