No evidence DC-10 was not airworthy before fatal 1992 Faro crash: Dutch probe

Dutch investigators have found no evidence that a McDonnell Douglas DC-10-30CF involved in a fatal landing accident at Faro nearly three decades ago was not airworthy, after a follow-up probe into the aircraft’s maintenance record.

According to a Portuguese inquiry into the 21 December 1992 crash, the Martinair trijet – approaching runway 11 in windshear conditions – suffered a hard touchdown on its right-hand main landing-gear after shifting winds led to a sudden high rate of descent.

The overloaded landing-gear collapsed and the wing ruptured, spilling fuel and causing a fire, and the aircraft (PH-MBN) broke up as it slid along the runway.

Fifty-six of the 340 occupants did not survive, and another 106 were seriously injured. 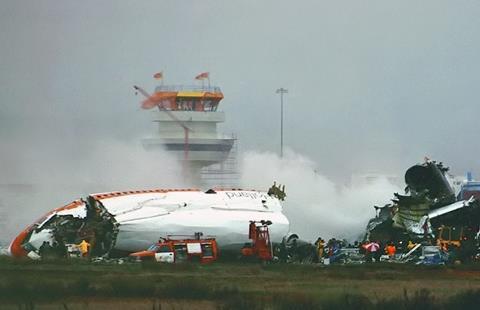 In January 2016 a television broadcast raised doubts about the aircraft’s airworthiness, suggesting that a mandatory change of landing-gear had been incorrectly postponed.

This eventually led to a formal request by the government for the Dutch Safety Board to study whether the broadcast contained any new information.

But having carried out an investigation – which was delayed more than six months by the pandemic – the Safety Board has written to infrastructure minister Barbara Visser to state that there is “no evidence” of information having been withheld or overlooked.

“The aircraft, including the landing-gear, met all inspection requirements and these were completed within the required timeframes,” it writes.

There was “no question” of any need to change the landing-gear, it says, or request any postponement – and the statement in the broadcast that the landing-gear had to be changed is “not substantiated”.

“As a final conclusion it was confirmed, once again, that the aircraft met all maintenance requirements and was airworthy on departure from Amsterdam for the flight to Faro,” the Safety Board states.