A military vehicle carried in a National Airlines Boeing 747-400 "most likely" broke free from restraints, punctured the aft pressure bulkhead and damaged control systems moments before the aircraft crashed in Afghanistan in 2013, according to documents release 3 February.

The US National Transportation Safety Board, which assumed responsibility for the investigation from Afghanistan last year, has not yet issued a final report, but documents made public by the agency suggest factors in addition to a shift in the aircraft’s centre of gravity contributed to the fiery wreck.

The release of information has also prompted a law firm representing victims’ families to reiterate claims that Boeing and Telair International, which makes the aircraft’s cargo handling system, bear responsibility for the accident.

The 747-400 converted freighter, registration N949CA, crashed on 29 April shortly after takeoff on a flight to Dubai, killing seven crewmembers.

Video from a passing ground vehicle’s dash camera shows the aircraft pitching steeply nose-up shortly after takeoff, then rolling right, falling and exploding on impact with the ground. 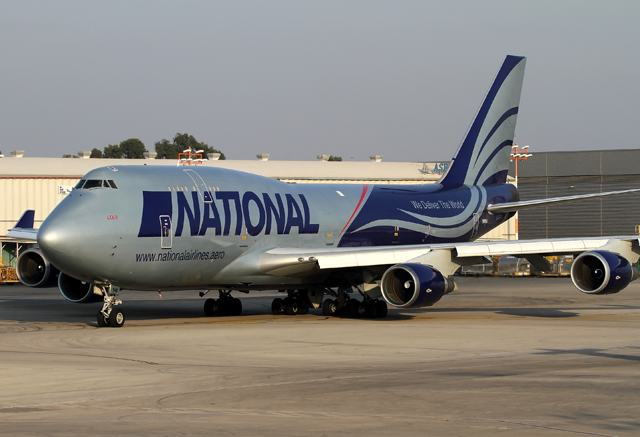 Documents from the NTSB and a report from Boeing, which examined the flight data recorder at the request of Afghanistan, show that the cargo consisted of five mine-resistant ambush protected (MRAP) armoured military vehicles.

Three of those vehicles weighed 18t each, and two weighed 12t each, according to NTSB documents.

The aircraft was loaded at Camp Bastian in Afghanistan and made a fuel stop at Bagram enroute to Dubai.

“Data and physical evidence… indicate that the most likely scenario involved at least one MRAP (aft-most) breaking loose of its restraints shortly after takeoff rotation, shifting aft and damaging the FDR/CVR, before penetrating the aft pressure bulkhead,” says Boeing’s report.

The company notes that the FDR, which is installed just forward of the aft pressure bulkhead, stopped working when the aircraft was just 33ft off the ground.

That finding agrees with another NTSB document noting that crash investigators found streaks of the FDR’s orange paint on the rearmost vehicle, and an imprint of that vehicle’s rear spare tire on the aft-pressure bulkhead.

The investigation also found aircraft parts, including those related to hydraulic systems, on the runway and ground along the aircraft’s flight path, suggesting the vehicle damaged the aircraft’s control systems.

The report adds, however, that loss of FDR data makes it impossible to determine the cause with absolute certainty.

It also notes that shortly before takeoff the pilots discussed that one of the straps had broken and one of the vehicles had shifted “a couple inches” during the previous flight, documents show.

Documents also describe how the cargo was loaded.

The pallets were secured to the 747’s deck using dozens of 5,000lb straps, documents say.

Shortly after the NTSB’s release of the documents, Nolan Law Group, which represents families of some crewmembers, issued a statement saying the new information “supports the claims” that blame belongs with Boeing and AAR subsidiary Telair International, which designed the cargo system.

Nolan and another law firm have filed wrongful death lawsuits on behalf of some families.

Boeing declined to comment on the accident or the statement from Nolan, saying international protocols calls for crash information to be released only by the proper investigative authority.

AAR did not immediately respond to a request for a comment from Flightglobal.