Southern search for MH370 picks up despite possible rain

Ten aircraft have been deployed in the search for a lost Malaysia Airlines 777-200 today, while analysis of the aircraft’s last Aircraft Communication Addressing and Reporting System (ACARS) transmission shows that Beijing was still the aircraft’s programmed destination 15 minutes before its transponder fell silent.

The search area for 24 March is to the east of previous search zones, according to an illustration published by AMSA. Located 1,970km from Perth, the zone should allow for aircraft to spend more time on station owing to a shorter transit time. Previously, aircraft were required to travel about 2,300km to reach the search area. 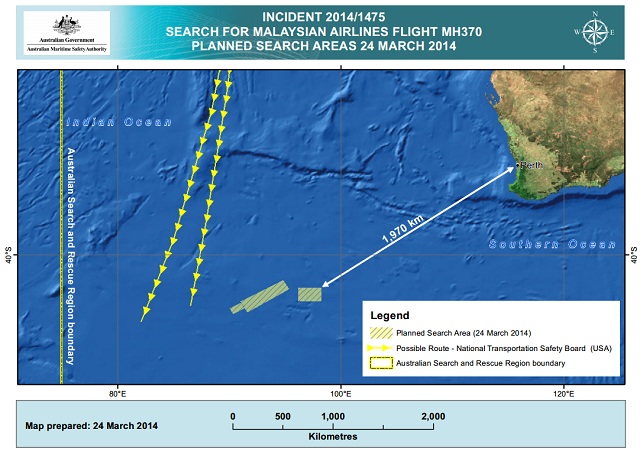 AMSA says however that weather in the search area could deteriorate, with rain possible later in the day.

On 23 March, Malaysian officials said that French satellites spotted objects in the waters southwest of Perth where one portion of the search for the missing flight MH370 is underway. Chinese and US satellites have also spotted objects possibly related to MH370 to the south-west of Australia.

Malaysia Airlines has also revealed that the aircraft’s last ACARS transmission at 01:07 on Saturday 8 March showed that no changes had been programmed into the aircraft’s flight management system up until that point.

The last voice transmission from the aircraft occurred at 01:19, while the aircraft’ s transponder disappeared from secondary radar at 01:21.

Forty-five minutes later, a primary radar contact was spotted moving westward over the Malaysian peninsula, but it took nearly one week for Malaysian officials to confirm that that this was, indeed, MH370.

Concerns that the aircraft may have flown west led to the original Gulf of Thailand search area being expanded to cover the Straits of Malacca. Only on Sunday 15 March did the Malaysian government reveal that Inmarsat data showed the aircraft had strayed into a northern corridor stretching to the Caspian Sea, or a southern corridor stretching far south into the Indian Ocean.

The transmissions involved the aircraft’s automated attempts to “handshake” with a satellite. The last such transmission occurred at 08:11 Kuala Lumpur time.

So far searches in both directions have proved fruitless. MH370 carried 227 passengers and 12 crew onboard when it vanished.