The coronavirus could cause demand for air travel to fall for the first time since the global financial crisis, with operators in Asia-Pacific hardest hit, according to an initial impact assessment from IATA.

Based on a scenario where the coronavirus has a “V-shaped impact” similar to that seen during the SARS outbreak in 2003 – which was characterised by a six-month period with a sharp decline followed by an equally quick recovery – global demand measured in RPKs would be 4.7% down on IATA’s previous 2020 outlook.

In that outlook, it predicted a 4.1% rise in passenger demand for the year, hence its new assessment suggests a 0.6% net contraction. Demand for air travel has risen every year since 2009, when RPKs fell by 3.5%. 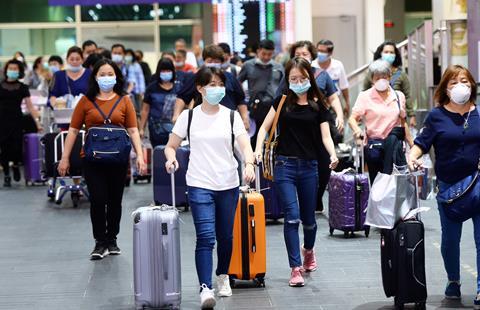 Global airline revenues would be some $29.3 billion (€27.1 billion) lower under IATA’s latest assessment, which is a 5% drop from the association’s previous forecast for 2020.

“Airlines are making difficult decisions to cut capacity and in some cases routes,” states IATA director general Alexandre de Juniac. “Lower fuel costs will help offset some of the lost revenue [but] this will be a very tough year for airlines.”

Carriers in Asia-Pacific would see a 13% drop in full-year passenger demand, IATA estimates, which would translate to an 8.2% net contraction compared with 2019 levels.

The region’s carriers would see revenue lower by $27.8 million – the bulk borne by China-registered operators.

Some $12.8 billion would be lost in China’s domestic market alone.

Outside Asia-Pacific, carriers would see a revenue loss of $1.5 billion – but only if the demand fall is limited to markets linked to China.

“If [the coronavirus] spreads more widely to Asia-Pacific markets then impacts on airlines from other regions would be larger,” IATA says.

The association adds that it is too early to predict what lost revenue would mean for global profitability.