Southwest Airlines’ chief executive officer Gary Kelly has tested positive for coronavirus just two days after he and other US airline executives appeared in-person to testify in front of US congressional committee.

“Although testing negative multiple times prior to the Senate Commerce Committee hearing, Gary tested positive for Covid-19 after returning home, experiencing mild symptoms, and taking a PCR test,” the Dallas-based low-cost carrier says on 17 December. “Gary is doing well and currently resting at home, he has been fully vaccinated and received the booster earlier this year. Gary’s symptoms continue to be very mild, and each day he is moving closer to a full recovery.” 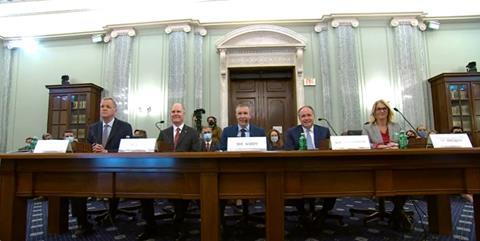 Airline executives testify in front of the US Senate Commerce Committee on 15 December. Gary Kelly is second from left.

While the five participants were seen wearing masks before the event, none of the executives were wearing face coverings during the testimony.

The news comes as the USA is bracing for a wave of the highly-contagious Omicron variant of the coronavirus to sweep across the country.

According to the Centers for Disease Control and Prevention (CDC), the US’ public health agency, the seven-day moving average of new cases has climbed by 25% since the beginning of the month. On 1 December that average was 86,893 cases, and on 15 December it had risen to 119,546 cases.