United Airlines is preparing for a dark scenario for the aviation industry in the coming months as the coronavirus decimates demand and customers stay away from travel in order to protect themselves from becoming infected with the fast-moving flu-like disease.

United’s president Scott Kirby told investors at the JP Morgan Aviation, Transportation and Industrials Conference on 10 March that the airline is already seeing declines in gross bookings of up to 70% in some geographies, and is preparing for a stark drop-off in revenue for the rest of the year. 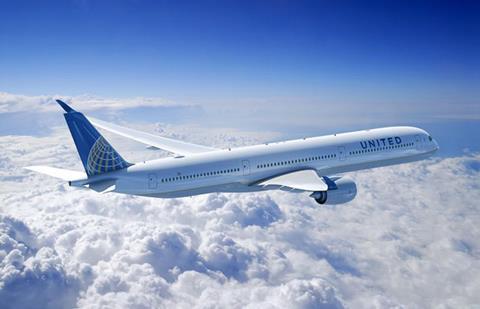 “This is a crisis that is going to have a large near term impact on revenue. We are planning for it to be deep,” he says.

While January and February were the number one and two winter operations months in the history of the Chicago-based carrier, respectively, United said that demand dropped sharply in the first few weeks of the crisis, from about mid-February. The airline reduced its domestic capacity by 10% and its international capacity by 20% on 4 March.

Many conferences, conventions and business meetings across the US and around the world have been cancelled, thus driving the corporate demand lower. ”Leisure travel is just a couple of weeks behind on the booking curve,” Kirby says.

Kirby now says United will eliminate 20% of domestic capacity in April and May each, and at least that amount in later months until the airline sees a concrete and significant pickup in demand.

So far, gross bookings in Asia-Pacific are down about 70%, with gross bookings to Europe down about 50%, Kirby says. Revenues could fall as much as 70% in April and May, 60% in June and at least 40% in the months thereafter for the rest of the year.

“This demand scenario is not a forecast but what we are planning for under a dire stress test scenario,” he says. “Demand was down 40% for two months after 9/11. This is worse than the post-9/11 decline in demand.”

He adds that the airline is planning for a full recovery time of 18 months, and it will take two to four years for the company’s capex and opex budgets to return to normal levels.

“We are 100% focused on making it through the near term crisis,” Kirby says. “We have to see demand recover, and then we are going to restore and go further on strengthening the balance sheet before we let capex go up again.”

Asked whether or not the airline is considering furloughs of staff during the crisis to keep costs down, Kirby says that the company’s “first objective is to take the steps required for United to survive, and the second objective is to do so without furloughs.” If it becomes necessary to do furloughs to save the airline, “I’ll feel awful, but I won’t hesitate to do it.”

Regarding the ongoing discussion about a government bailout of the travel and aviation industry, Kirby says that for the moment, United will not count on government intervention. “I am encouraged for the US economy to hear that the conversation is starting because I do think this [will have a] short term impact for the economy and an appropriate place for government to be having those kinds of conversations.”

Slot relief is another worry for airlines that are cutting routes during the crisis. Earlier on Tuesday, the European Commission said that it will “rapidly” legislate to suspend rules that force airlines to operate 80% of their scheduled flights in order to hold on airport slots. The use-it-or-lose-it rules have been heavily criticised by airlines, which argue that the lack of flexibility prevents them from responding to the demand reductions caused by the coronavirus. Some airlines have continued operating “ghost flights” just to maintain those slot assignments.

“If you are worrying about climate change, good grief. How ridiculous is that,” Kirby says.