Indonesia has imposed capacity limits on domestic flights as part of a raft of measures that includes restrictions on children travelling.

The Directorate-General of Civil Aviation states in a 27 July notice that effective immediately, capacity on all scheduled domestic flights will be capped at 70%. This is to allow for social distancing on board aircraft, it adds. 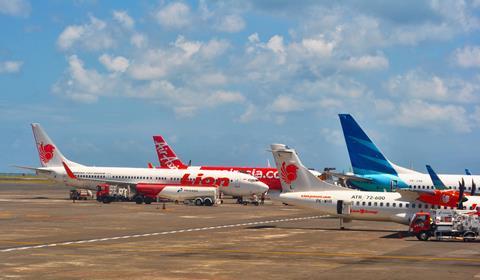 The Indonesian government has extended curbs on domestic flights.

The latest measures come as Indonesia extended restrictions across the country until early August.

Existing measures for travellers from Bali and Java, where capital city Jakarta is located, have been extended to other islands and provinces, including Sumatra, Sulawesi and Kalimantan.

As with its previous announcement, the agency did not impose an outright ban on flights, but urged travellers to defer non-essential travel.

“Meanwhile, we will restrict travel for those under the age of 12,” the agency adds, but did not elaborate.

Since then, the numbers have dropped slightly, but still remain dangerously high. As of 27 July, the country reported more than 47,000 new infections.

The restrictions have forced at least one carrier — Indonesia AirAsia — to temporarily suspend all its flights. Other Indonesian carriers have drastically cut capacity on their domestic networks, as the measures kicked in.