The company says on 15 February that the aircraft made its maiden flight on 21 December in Italy, following regulator approval. Tecnam says the flight marks a milestone in its research and development on de-carbonization and alternative powertrains. 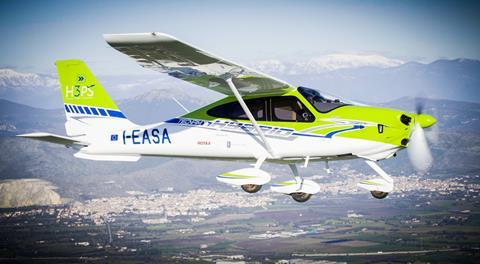 The company adds that the four-seat general aviation aircraft is the “first of its kind”.

“Though H3PS is not intended for market purposes, our successful flight tests demonstrate that hybrid powertrain, with combustion engine coupled with an electric motor, can bear the same useful load of the traditional 180hp combustion engine,” says Tecnam’s research and development director Fabio Russo.

Rob Watson, president of Rolls-Royce electrical adds: “This project has continued to build our capabilities in delivering all-electric and hybrid-electric power and propulsion systems for the advanced air mobility market.”

Tecnam says it is using these kinds of projects to work on other green aviation technologies.

Last November, Tecnam disclosed specifications of its in-development P-Volt electric aircraft, and launched a programme under which P2012 Traveller owners can convert their aircraft to battery power.

The P-Volt is based on its P2012, an 11-seat passenger aircraft powered by twin Lycoming TEO-540 piston engines. The airframer is also developing this aircraft in partnership with Rolls-Royce, which is supplying the electric powertrain.