Irkut has identified evacuation and electrical discharge protection among outstanding tests for its MC-21-300 twinjet, as the aircraft edges towards certification.

Assessment of take-off and landing characteristics is also being finalised, following the evaluation of flight performance and aircraft systems, and noise measurement. The MC-21 has also completed runs on wet and snow-contaminated runways and undergone icing tests. 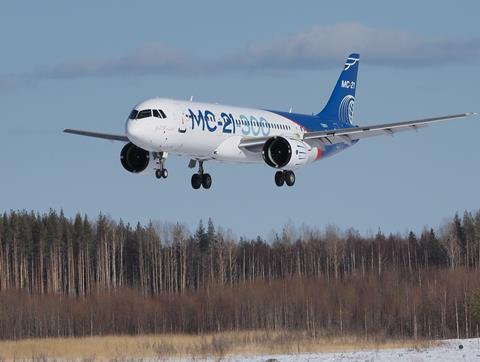 “Flight and ground tests continue,” says Kirill Budaev, Irkut director of sales and marketing. “In many ways our efforts today are aimed at improving the software.”

Evacuation tests are planned for the “near future”, he says, as well as flight in various climatic zones.

Budaev says the pandemic has affected the work of “almost all” project participants, both in Russia and overseas, owing to travel restrictions.

“Enterprises temporarily stopped work and delayed deliveries of components,” he says. “In particular, during the tests, even with the extensive use of advanced information technologies, the direct work of specialists on the aircraft is regularly required.”

The continuing impact of the health crisis means the overall effect on the MC-21 programme is “difficult to determine”, he adds.

Irkut is aiming to secure Russian certification for the Pratt & Whitney PW1400G-powered version by the end of this year.

United Aircraft (UAC) chief executive Yuri Slyusar states that serial production is under way, with the delivery of wings for initial customer aircraft.

“The production rate will be gradually increased,” he says, but adds that the output will “depend on the market situation”. Irkut’s facilities will be capable of manufacturing 72 aircraft annually.

Irkut’s primary modification to the aircraft so far has been the introduction of domestic Aviadvigatel PD-14 engines.

“Creation of a new generation of Russian systems is primarily associated with the evolutionary development of the industry and allows us to offer the customer a wider choice,” says Budaev. “The MC-21 initially enters the market with two types of engine and this increases the stability of the programme.” 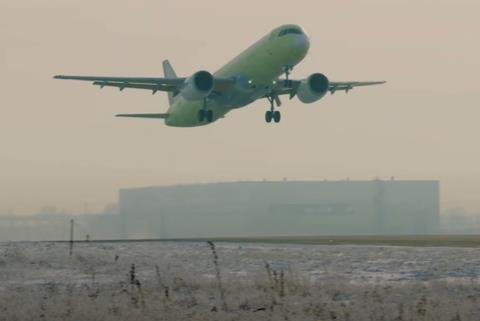 PD-14 engines are being developed as alternative to PW1400Gs

Along with the PD-14-powered -310 version, the airframer says documentation has been released for the shrunk -200 variant of the twinjet, which is centred on a 165-seat configuration at 29in pitch.

“Further development of the project will be related to the market situation,” says Budaev.

Irkut has taken over the Sukhoi Superjet 100 programme, which is also undergoing modification with the aim of fitting Russian engines and more domestic components.

Among other refinements developed for the Superjet are winglets – known as sabrelets – but Budaev says nothing similar is planned for the MC-21.

He says the aerodynamic development process considered a layout with winglets, but opted instead for a higher-weight wing, of greater length, without them.

“We made sure that the MC-21 with an [elongated] wing has the best fuel efficiency indicators on typical routes for this class of aircraft,” he states.

Bringing the Superjet and MC-21 programmes together is part of a “substantial corporate transformation” and an “important stage” in UAC’s development, says Slyusar, pointing out that the long-term aim is for half of the company’s revenues to come from civil aviation.

“Centralisation will go further to eliminate duplicate administrative functions, create general corporate centres of competence and service, and expand co-operation of production plants,” says Slyusar. “The goal is obvious – to improve the efficiency of the corporation as a whole.”

Slyusar says a unified administration for Irkut, the Superjet design team and the associated Yakovlev engineering centre is being “gradually formed”.

“Consolidation of Russian aircraft companies is why United Aircraft was established,” he adds. “The world has changed, and competition is no longer between different design bureaus within one country but between large global players.”