Airbus rejects Qatar claims for compensation over A350 grounding

Airbus has submitted a robust legal defence against Qatar Airways over the carrier’s grounding of several A350s, insisting the aircraft does not suffer from a design defect and that skin-paint deterioration is not an airworthiness issue.

The airframer has filed a defence and counterclaim in its legal dispute with the carrier, which asserts that Qatar Airways refused to pay the balance for, or take delivery of, two A350-1000s and, as a result, is in breach of contract.

AIrbus is counterclaiming damages of $220 million with respect to the undelivered A350s – aircraft MSN409 and MSN430, scheduled for delivery in December last year – as well as reimbursement of purchase incentives granted when Qatar Airways originally ordered 80 A350s.

The counterclaim also states that Airbus has terminated the aircraft purchase agreement for MSN409 and another A350-1000, MSN438.

According to the filing one of Qatar’s A350-900s, MSN36, underwent a livery revamp in November 2020 to promote the football World Cup in Qatar this year.

This included chemical paint stripping and mechanical abrasion, at Qatar’s request, but some of this work affected the aircraft’s paint and the expanded copper foil layer that provides lightning-strike protection. Airbus proposed remedial work on MSN36 including some 900 patch repairs, although these covered only a small proportion of the aircraft’s surface.

Certain other aircraft in the A350 fleet appear separately to have suffered a degree of paint cracking and, in some cases, damage to the foil layer. This is attributed to differences in thermal contraction and expansion between the composite skin and the paint layers, as a result of which aircraft might need more frequent repainting.

But analysis by Airbus and the European Union Aviation Safety Agency has found that neither the structural integrity of the A350s nor the functioning of the foil layer are affected, and that there is no airworthiness concern or defect in the aircraft’s design.

The filing claims that there are Qatar A350s still flying, despite being affected by the paint cracking, and that no A350s operated by other carriers have been taken out of service over the issues.

It suggests that the Qatari civil aviation authority was not given all the relevant information by the airline regarding the condition of MSN36 or the findings on the other A350s, and that the regulator simply acquiesced to a request by the carrier to ground the aircraft. 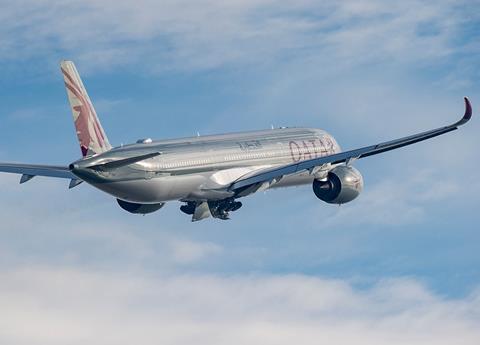 The grounding is set against a background of previous friction between the airframer and the airline, but also the turbulent environment in which Qatar Airways has been operating in recent years.

Qatar Airways was rapidly expanding and had over 100 aircraft still on order with Airbus – including most of the 80 A350s – when its operations were substantially impeded by a costly blockade by other Middle Eastern countries in 2017.

This blockade was only resolved early in 2021, by which time the pandemic had engulfed the global air transport system and forced carriers to slash capacity, particularly in the long-haul sector. Qatar sternly insisted that airframers should not attempt to force delivery of aircraft on the carrier in the depressed climate.

According to the court filing, Airbus rejects any claim for compensation for the grounded A350s because the aircraft have remained safe and serviceable, and the grounding has been imposed on the incorrect basis that Airbus had not carried out a root-cause analysis or propose a permanent rectification.

The airframer has maintained that it wants to resolve the situation amicably, but is prepared to defend its reputation in court.

Qatar Airways says the grounding has newly extended to cover 22 aircraft, and insists it will not allow the aircraft to return to service until a “full and conclusive” root-cause analysis has been completed, the impact on continuing airworthiness has been established and a solution been found to permanently correct the root cause and repair the damage.

“It is important to clarify that neither Qatar Airways nor its legal team are aware of any efforts by Airbus to try to resolve the situation in an amicable way,” claims the carrier, adding that it will continue is course of legal action.