South Africa’s political opposition is insisting the government detail an agreement with South African Airways unions setting out plans to establish a successor to the crumbling flag-carrier.

In a response accusing the department of public enterprises of undermining SAA’s business rescue practitioners, the Democratic Alliance says it will seek a commitment that the government will not make “any further bailouts” to the airline, or provide any state guarantees or other form of security.

It is to ask public enterprises minister Pravin Gordhan for clarity on a “leadership compact” reached between various parties in SAA, arguing that the information provided about the agreement is “scant on detail”.

“The question that all South Africans will be asking is whether or not this deal includes yet more billions of rands in bailouts to keep the bankrupt airline going,” says the party, “and whether or not majority ownership of SAA will be transferred to private equity?” 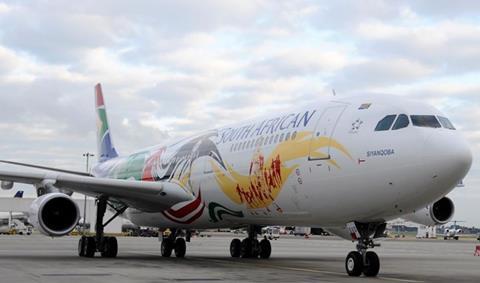 South African Airways has languished for months in business rescue

SAA had been undergoing business rescue but the process ran out of funding, leading the rescue practitioners to state the carrier had only two options – either immediate liquidation or a deal with employees for a retrenchment package.

But the department of public enterprises says the new agreement is part of a “bold and audacious” process committing all parties to a “new approach”, demanding “major performance-based culture change” if South Africa is to retain competitive and profitable international airlift through a strategic national asset with both public and private participation.

“It will not be the old SAA but the beginning of a new journey to a new restructured airline, which will be a proud flagship for South Africa,” the department states.

“The transition to the new airline may require sacrifices, pain and hardships for all concerned, particularly for those employees who may be displaced.”

It adds that it is working with unions on a business model to give a new national carrier a competitive edge.

“The agreed intention is to produce an airline which is a catalyst for investment, job creation in key sectors, economic growth throughout all regions of the country,” the department states, “and is a mirror to the world reflecting the splendour and beauty of our great nation.”

But the Democratic Alliance describes as “astounding” the unions’ and public enterprises minister’s belief that they can enter an agreement that “apparently has no details” and that SAA’s rescue practitioners – Les Matuson and Siviwe Dongwana – are simply expected to implement it, regardless of the expiry of a 1 May deadline for retrenchment packages.

“It is unbelievable,” it adds, pointing out that the practitioners have an obligation to follow South African company law and either devise an acceptable rescue plan or, if this is not possible, apply for liquidation.

Heavily loss-making SAA has spent five months in business rescue and the emergence of the coronavirus crisis has essentially wrecked the carrier’s chances of survival. “The public deserves clarity on the future of SAA and the full details of any agreements the minister has entered into,” says the Democratic Alliance.

It adds that the government needs to guarantee that public money will “not be wasted on a lost cause”, particularly during the coronavirus crisis.