In talks from over a year ago, eight low-cost carriers in Asia-Pacific came together on 16 May to announce a landmark alliance that promises to "transform" the region's low-cost market.

The alliance will use a common booking system, Air Black Box, which operates a platform that can link different airlines' reservation systems. Passengers will then be able to book seats on any of the eight carriers' flights, in a single transaction on one member's website.

Scoot chief executive Campbell Wilson tells Flightglobal that the alliance is a Scoot and Nok initiative that first started two years ago, when the duo sought to develop and operate a platform that links various airline booking systems.

“Since February 2015, we (Scoot and Nok Air) began to speak to prospective partner airlines. Some requirements they had to have were having a stable home base market, excellent network of destinations and strong traffic,” says Campbell.

Between the members, the alliance covers 160 destinations and flew a combined total of over 47 million passengers in 2015.

Members say the alliance will strengthen their distribution in non-home markets, helping to raise load factor and profits. It also expands saleable networks by possibly providing interline itineraries, while allowing them to retain ancillary revenue opportunities. 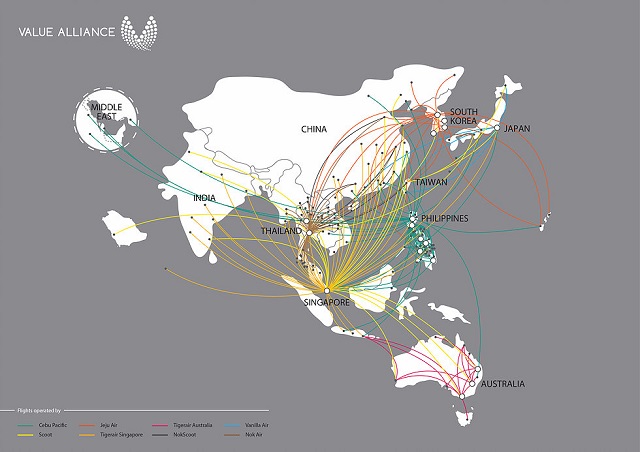 Notably, however, the alliance excludes the region's largest low-cost giants: AirAsia, Jetstar and Lion Air. It also does not have any members in China or India.

Asked if the trio were invited to join the grouping, Wilson says: “Why are we doing this? To expand our sales and distribution, to expand our networks. Would we want to share with other airline groups? We are doing this for our own strategic reasons, the fact that you don’t see some airlines here speaks for itself.”

The three groups have subsidiaries in various countries within the region, and a substantial network of their own.

Flightglobal's Fleets Analyzer and FlightMaps show that the AirAsia Group operates a fleet of 166 aircraft across 156 destinations. Lion Air has 113 aircraft servicing 41 points while the Jetstar group has 122 aircraft that fly to 99 destinations.

Shukor Yusof, founder of aviation advisory firm Endau Analytics believes that the alliance will give the eight players a shot at challenging the giants.

“Besides mounting a more coordinated challenge against them, it has become a matter of survivability for one or two of the airlines. Despite the decline in fuel prices and better operating environmental, carriers like Nok Air are still suffering losses.”

He also points out the inclusion of Vanilla and Jeju from Northeast Asia, a possible growth area for the other six members. "For low-cost carriers in ASEAN, Northeast Asia, namely Japan and Korea, are highly under-served," says Shukor.

"To begin with, there isn't too much competition between the members in terms of their network structure. And we shouldn't preclude future coordination of networks and schedules - barring regulatory approvals," he says. "It's a cost effective way to grow your business without the need to add additional capacity or frequencies that may jeopardise your overall operating numbers."

While Campbell says the carriers were picked for their network and strength, some observers point out that a number of the carriers have links to a common party - the SIA Group.

This goes beyond its low-cost subsidiaries Scoot and Tigerair. The anti-trust immunity on flights extends to Tigerair with Cebu Pacific, as well as Scoot and Nok Air with NokScoot.

SIA was also previously in talks to take a stake in Jeju, although this has since been aborted. SIA also has a codehare partnership with Vanilla's parent ANA.

Wilson, however, denies any SIA involvement in Value Alliance: “I can categorically state that this is a Scoot and Nok Air-driven initiative and the SIA Group is not involved in any way.”

The formation of the alliance - the world's largest low-cost grouping - comes hot on the heels four-month old U-FLY Alliance, which focuses on North Asia. At present, it features only Chinese carriers: HK Express, Lucky Air, Urumqi Air and West Air.

“The launch of this new alliance poses no threat to the competitive landscape. In fact, it would encourage creative collaboration and foster healthy growth in the LCC industry. Meeting the huge demand for low-fare air travel across the world can be significantly enhanced by strong, independent LCCs joining forces and connecting their networks to give a hugely expanded range of destinations to travellers, particularly in the fast expanding Asian air travel market,” says U-FLY, in response to Value Alliance's formation.

Asked if the two alliances could collaborate, Campbell says: “They are in a different geography from our carriers, but it is still premature to say what could happen.”