The position is S38.082 E87.400 (latitude and longitude using decimals rather than minutes).

The 777-200ER has been missing since 8 March 2014, and no trace of it has been found despite an extensive multinational search.

The location this experienced captain has identified is not fundamentally at odds with the present MH370 search assumptions, being in much the same part of the southeastern Indian Ocean, but it is just outside the core target area currently being trawled by a search team led by the Australian Transport Safety Bureau (ATSB).

Capt Simon Hardy’s calculations are based on a combination of data which include the Inmarsat satellite communication "handshake arcs", his expertise in 777 performance calculation, and some mathematical "reverse engineering" of the navigation geometry known to apply to this flight.

Hardy is aware that many very able people have theories about MH370, not least those advising the search, but believes the result of his calculations is worthy of examination, and hopes the ATSB will find the result useful. "I respectfully recommend it to the MH370 search team," says Hardy, who adds that his analysis could be refined with low-altitude wind speed estimates of the speculated crash zone.

Hardy, an experienced airline pilot, currently works as a senior 777 captain for a major international airline. Like other aviators he was distressed by the MH370 loss, and his concern that relatives of those on board might never know what happened inspired him to begin a geometric investigation of known MH370 navigational facts. He emerged with a set of conclusions that enabled him to isolate what he believes to be MH370’s actual track.

He explains his rationale and how the result emerged: "Rather than picking speeds and a route at random and making them fit with the [satcom handshake] arcs, I have managed to let the arcs tell us both the speed and direction, and finally a location – the exact track between arcs 4 and 6 – where it was doing that speed and heading. I have 'reverse engineered' it."

He continues: "I was expecting to have to deduce a path from waypoint ANOKO [where Hardy calculates the 777 first turned southward] for the aircraft to get to this identified track across arcs 4-6, but then found to my amazement that the track line, when extended north from the 5th arc over a very large distance, went within 2nm of ANOKO. This was the final and strongest eureka moment!"

The "reverse engineering" involved testing a series of plausible tracks southward over the Indian Ocean from the 777's last known position, and discovering the only trajectory that – uniquely – matches the ratio of actual elapsed times between the consecutive Inmarsat/MH370 "handshakes". He then found, subsequently, that certain known data, when tested against that navigational trajectory, made sense. For example, on that identified track, the actual elapsed time between "handshake arcs" would occur if the 777 was flying at its long-range cruise speed – possibly a coincidence, but a likely choice by the person directing the flight.

Hardy worked with one key assumption: that, once set on this southward cruise, the aircraft's true air speed (TAS) and its track (based on true north), remained the same or were hardly varied.

Hardy explains: "For the purposes of this purely mathematical/geometrical investigation I am making one assumption: that in most scenarios (hypoxia, fire, a hidden hand), the track and speed of the aircraft from 2141Z [UTC/GMT at the 4th handshake arc] to 0011Z [time at the 6th arc] would be constant." 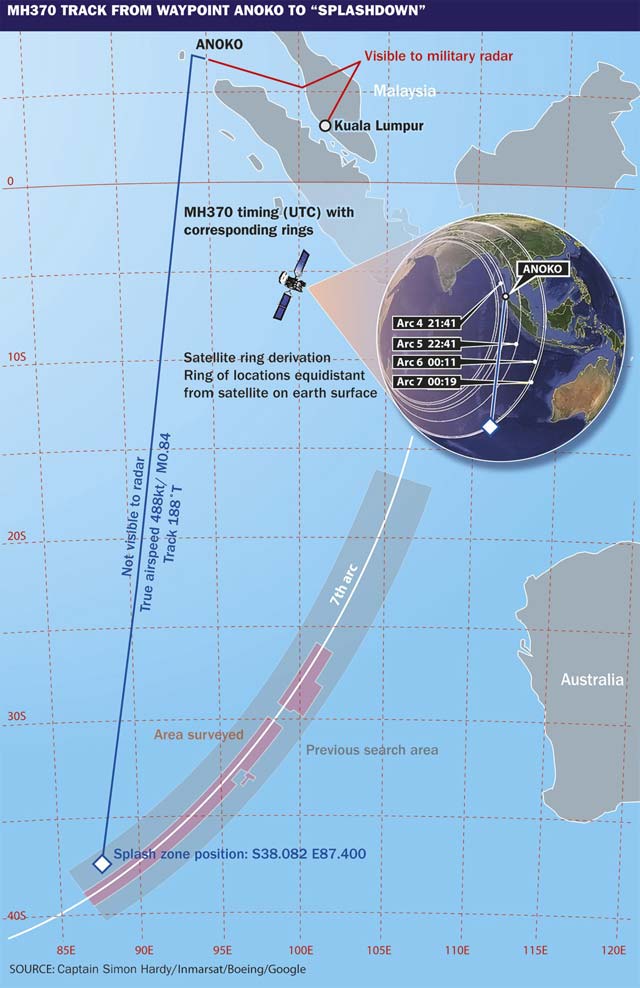 Here is his methodology: "In order to extract the information from the arcs we have to introduce some 'what ifs'. What if the aircraft crossed the 4th arc at some random position… say Position A [see diagram]? And if it did, what route could it have taken from there?"

Hardy then explores the track alternatives beginning at A. "If a series of straight lines are projected from point A through arcs 4 and 5 to different points on arc 6, only one line satisfies the ratio of 1:1.5". That ratio is derived from the 1h between the satellite handshakes at arcs 4 and 5, and 1h 30min between 5 and 6, which are the actual elapsed times for MH370 between these respective handshakes.

Hardy continues: "Line A shows the only straight line from point A that satisfies this ratio. If we now measure the distance of the line from arc 4 to arc 5 we will get the distance travelled in that hour, hence the speed required to fly Line A. In this case line A would have to be flown at a speed of 541kt." Hardy stresses that this was still a "what if" experiment at this stage: "Of course we don't have any reason to think that it did go over point A, but if it did then it flew that line at 541kt."

Using the same elapsed-time ratio between handshake arcs, he points out: "We can do the same for another random point: B. This time the only track that the aircraft flew if it passed point B is as shown. This line's length gives a speed of 428kt."

The lines appear to be nearly parallel. Says Hardy: "This is great news as we can measure the angle of the lines. We find that they only vary from 188°T to 192°T [track direction relative to true north]." These clues as to the aircraft's true track between times 2141Z and 0011Z point, he says, to a track of 190°T plus or minus 2°. 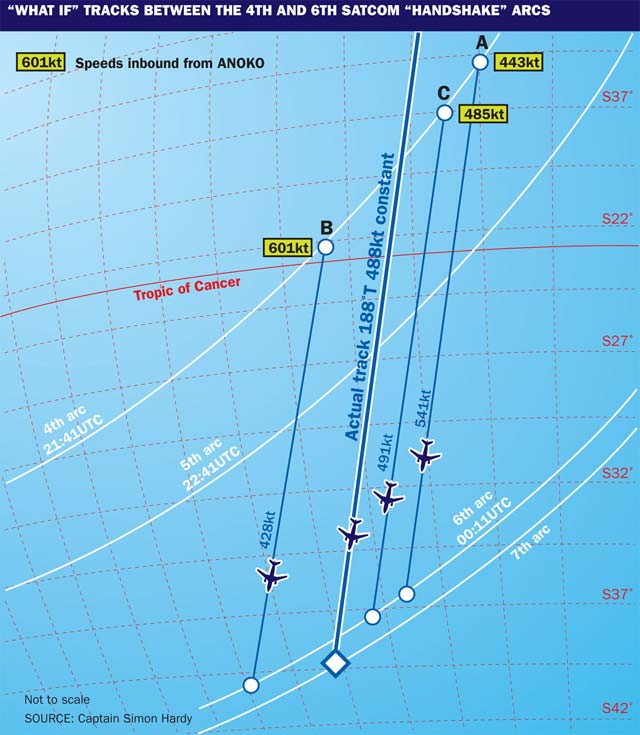 The next task – again purely using maths, Hardy explains – was to try to find out where MH370 actually crossed the arcs, assuming it was flying this approximately 190°T track, starting from a known position.

He continues: "Extending the line from just south of Penang [where the aircraft's radar track passed] to the 1822Z position, it lines up within 2° with waypoint ANOKO on the Chennai FIR boundary. Its route and speed are known from 1722Z until 1822Z so we can work out a time at ANOKO of 1836Z."

"This satisfies the 15min window so we will use ANOKO as the turn point, bearing in mind that MH370 has turned at a FIR boundary before on this journey – and indeed flown along a FIR boundary [Lumpur and Bangkok]." Many students of the MH370 disappearance believe this tactic of “sitting on the fence” was calculated.

Plotting a graph of true air speed against longitude using the three speeds derived for the sectors from ANOKO to arc 4 and then the three for the legs beyond points A, B and C, the lines cross at 488kt and 91.25E. 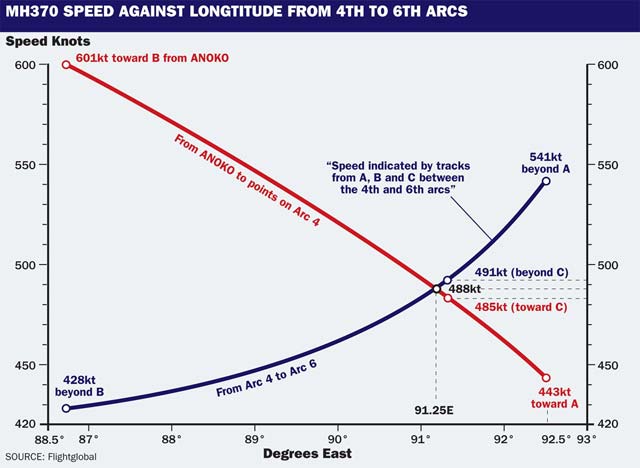 Using the same logic as that for drawing lines A, B and C, if at this point a fourth line is drawn just 5nm west of line C, the speed that fits the equations at this line is 488kt and the true track is 188°T. Logic suggests that is MH370’s actual track. Interestingly, a group of aviators calling themselves the Independent Group – also offering advice for the ATSB team – like Hardy calculates the southbound leg beginning at ANOKO and offers a remarkably similar track: 187°T. But IG reached its conclusions via a slightly differing logic, so there is an argument that the two calculations could be considered to validate each other.

A line from ANOKO to this position, across 1,500nm of ocean, happens also to be 188°T - which Hardy considers "very significant" as an indicator of MH370's track.

Hardy adds some observations: "We have been drawing straight lines on a curving map, so some correction is required to make them truly straight. This gives a 6th arc crossing point of S37.388 E87.550. This shortens the 5th to 6th arc leg slightly, but is acceptable as there are two reasons the ground speed may have been slightly less for this leg: an increasing headwind component, or a climb to stay at optimum level at a constant Mach 0.84. This causes a slight decrease in true airspeed compared to lower levels."

As a part of the process of validating his calculations, Hardy provides some insight based on his 777 operating experience, examining what he would have done if he had intended an outcome such as this, as many experts believe the person directing MH370 did from the time it departed from its flight planned route.

"Using my knowledge of the Boeing 777, I would have selected long range cruise speed if I wanted to take the aircraft as far as possible, that being nominally M0.84, giving a true airspeed of 485kt to 491kt,” says Hardy, explaining: “The geometrically derived speed from the arcs and the radar plot of 488kt TAS is absolutely crucial in giving confidence in the results. The arcs were derived mathematically, but they have delivered the exact speed I would have chosen."

He then looks again at the track logic: "The 188°T figure was found right at the beginning when we drew the three lines, and it comes purely from the satcom handshake arcs. Again this gives me great confidence in it. Meanwhile, viewing the oceanic area charts there is a mass of magnetic variation lines. In these circumstances of rapidly changing magnetic variation most pilots would select TRUE rather than the usual magnetic compass reference."

Hardy adds: "As the winds are probably unknown to the person directing the aircraft, and he doesn't want them to influence the direction the aircraft flies over the ground, he would select TRACK [not heading]. The aircraft then compensates for the crosswind effects, and he goes in the direction chosen."

Hardy examines whether his argument accords with calculations about where the fuel would be exhausted: "If we follow the 188degT line to the 7th arc we find that it meets it almost exactly at the same place where the fuel circle crosses the 7th arc. We have not used any reference to fuel in the analysis whatsoever, so this meeting of all three lines in one place makes one feel great confidence in the result."

Still not satisfied, Hardy examines alternative options that would provide the same outcome and finds there are none: "A southward turn of that aircraft earlier at 1828Z (more easterly) allows it more time to get to the arcs. This means a slower speed inbound to an 188°T line which is further west, which would demand a heading change. This means there is no alternative line that has a constant speed inbound and outbound and doesn't require a heading change. The only complete solution is the one at line C starting from ANOKO."

Finally, Hardy adds: “The ATSB June report states that the aircraft is assumed to be at a constant 35,000ft for all the arc calculations. If the aircraft was in fact at sea level at the 7th arc, then the arc will be actually closer to the satellite by an amount based on 35,000ft (5.8nm) factored to simulate the equivalent distance calculated horizontally. This means that the adjusted 7th arc is approximately 4.9nm inside the 7th arc shown.”

He extends this logic: “This method gives a splash zone position of S38.082 E87.400. The maximum range cruise [fuel exhaustion] arc also goes extremely close to this point [30nm]. The ATSB [October] area of interest extends some 600nm along the 7th arc but stops 20nm short of where the 188°T crosses arc 7 (and the adjusted arc 7) where I believe the aircraft is positioned.”