​ANALYSIS: Boeing NMA – when, and who will order?

Momentum appears to be gathering around Boeing's proposed New Mid-market Airplane (NMA) – already being referred to by some as the 797. Reports indicate a potential launch this year or in early 2019, although this is perhaps more likely to refer to an authority to offer (ATO), rather than the full industrial launch.

There are undoubtedly still some hurdles to overcome before Boeing's senior management feel able to commit company money and resources to an all-new aircraft, which is likely to cost over $10 billion in nonrecurring expenditure.

Key elements of any business plan will include the market size, assumptions on competitors' response and hence market share, as well as pricing.

Any all-new aircraft must demonstrate an advantage against what is available today. The NMA is not intended to fly further than today's designs, or have improvements in performance, but will be sold primarily on the basis of reductions in operating cost – driven by lower fuel burn – plus the associated benefit of lower environmental impact. Therefore, Boeing will need to have full confidence in nonrecurring and recurring costs, as well as through-life cash operating costs.

Boeing itself can obviously bring new technology to bear itself in the aim of lower operating costs, but this will also rely heavily on the engine. This appears to be a key driver in terms of timing – both for programme launch and entry into service (EIS). Without knowing precise details of each engine manufacturer's plans and strategy to meet Boeing's performance targets, it is impossible to comment on the likelihood of meeting a 2025 EIS. However, this already appears challenging, given that any engine (or engines) would have to be certificated during 2024. An imminent engine selection would require Boeing's confidence in engine technology that exists today, or is at least in the advanced testing stage.

A reminder of previous programme timescales perhaps gives some indication of the challenges Boeing faces in bringing the NMA to market in the mid-2020s. The table includes examples from the past decade or so. It does not include products from new-entrant manufacturers such as Mitsubishi or Comac, which have had to extend development timescales for their MRJ and ARJ21 respectively. Each programme has been categorised as an all-new aircraft, major development (re-wing/re-engine), or minor development (typically a re-engine with little other structural change). The ATO date refers to either a formally announced ATO or, in the case of the 747-8 and E-Jet E2, engine selection. 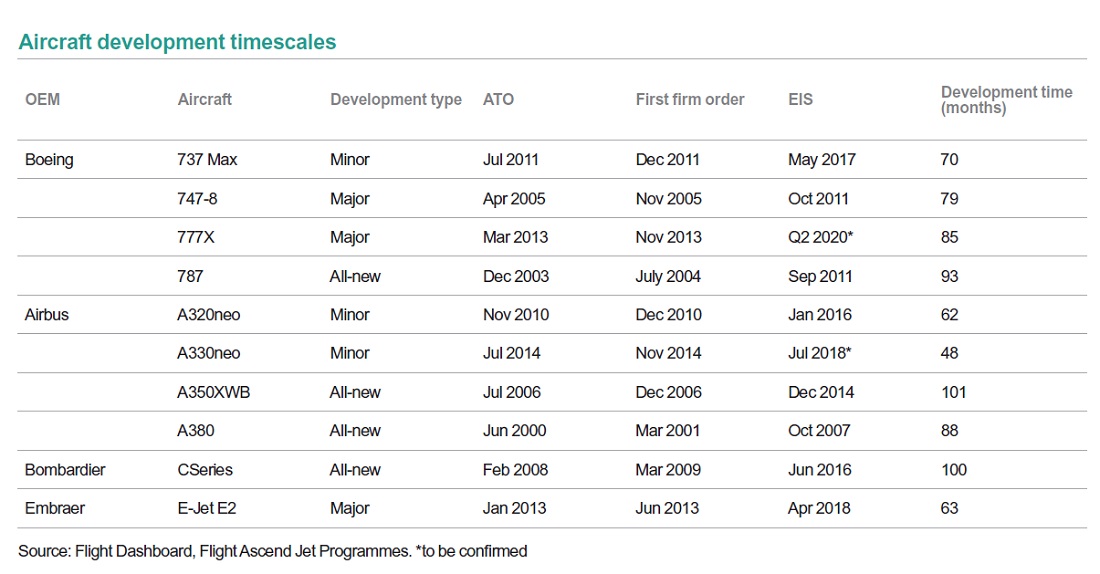 Taking a simple numerical average of the data suggests that for an all-new aircraft type from an established manufacturer, eight years will elapse from initial marketing launch/engine selection until service entry. Boeing's latest major aircraft programme, although not an all-new design, is the 777X. This programme will have a development timescale of just over seven years, unless there are any delays.

Therefore, if the NMA saw a marketing launch (ATO), with a concurrent engine selection decision, in late 2018, past history would point to an EIS around eight years later, in late 2026.

While this date could be perhaps brought forward, given the amount of advanced design work that may already have been done, an in-service date of 2025 seems optimistic. Airlines which may be interested in adding aircraft in the mid-market space therefore have a choice: wait for around eight years for a new type, or place orders for today's available models.

Many airlines have expressed interest in the NMA, either as replacements for existing types, or as a vehicle to grow their fleets or launch new mid-range routes. Generally, new programmes are launched on replacement demand, as this is easier to evaluate than growth opportunities lying several years ahead. It is therefore instructive to consider which airlines have mid-market aircraft in their fleets today, and the age profile of these types.

Assuming an EIS of 2026, operators would be looking to replace aircraft that would be more than 15 years old at that point in time. The first chart shows the age profile of the mid-market fleet in 2026, based on the current in-service passenger fleets of Boeing 757s, 767s, Airbus A321s and A330-200s. The small fleets remaining of A300s and A310s will have been replaced well before 2026, and are excluded. The oldest 787-8s were built in 2011, and are unlikely to be replaced with initial NMA orders.

Thus, the NMA cannot really be said to be a 757/767 replacement, as is too late. From Boeing's perspective, it may well be attractive to capture current Airbus customers, although the A321neo will be a formidable competitor over the next several years in retaining existing mid-life A321 operators. 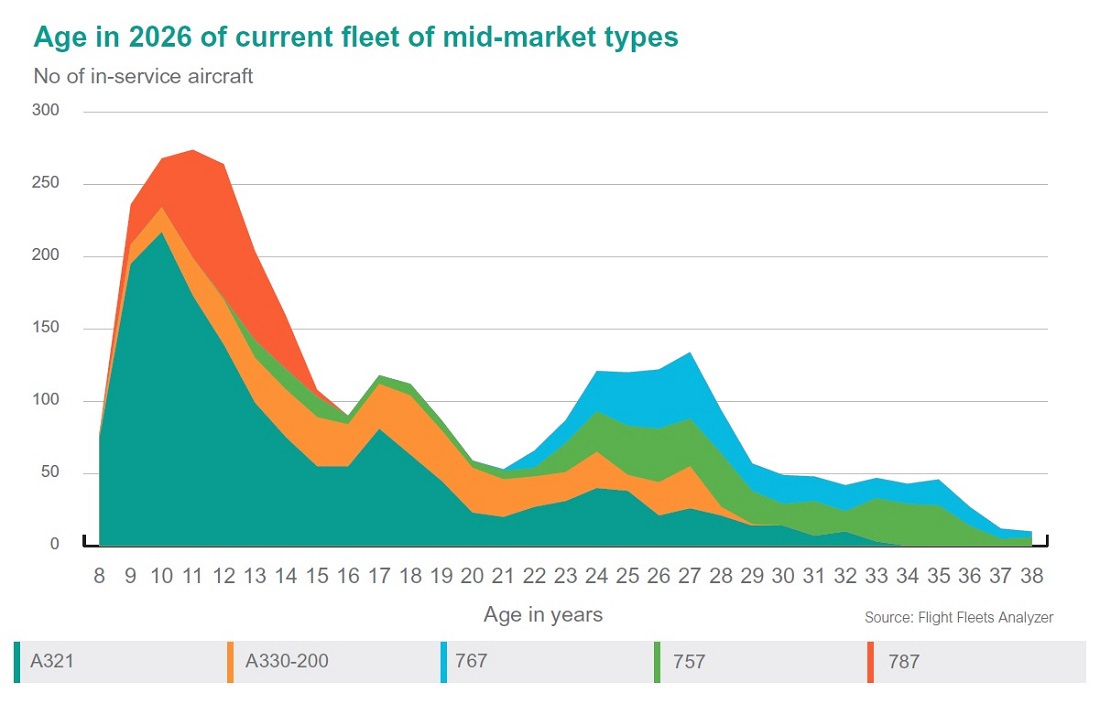 The largest current operators of these mid-market types are the three US majors American, Delta and United, followed by the three largest Chinese airlines (China Southern, China Eastern, Air China). These six airlines fly over 1,000 aircraft in the size bracket, almost one-third of the total fleet. They also represent about a third of the aircraft in the 15-25 year age bracket.

However, American has committed to order more 787-8s to replace its remaining 767 fleet, and will likely have replaced all 757s by the mid-2020s. Delta thus appears to be a key potential customer, as does United. Neither has ordered a direct replacement for its 767 fleet yet, and Delta still needs to place more orders to supplant its younger 757s. The three Chinese majors will also be significant potential operators, primarily for growth, but Airbus has a strong A321/A330-200 presence with them.

Beyond these six airlines, there are relatively few operators with large replacement needs. Only Turkish Airlines, Vietnam Airlines, Air Canada, Japan Airlines, Air France and Air India have more than 20 aircraft in the 15-25 age bracket by 2026, but several already have aircraft orders aimed at replacing some of them. Operating lease companies are also likely to be enthusiastic early adopters, based on their penetration of the 767-300ER, 787, A330-200 and A321 fleets. 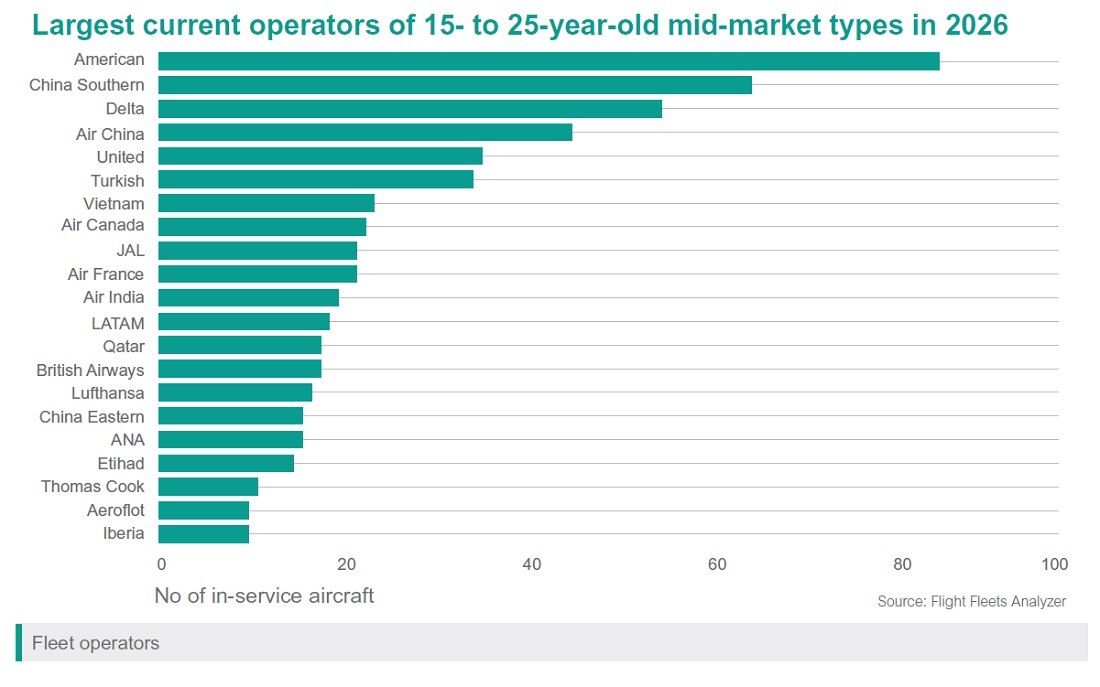 The launch timing of the NMA thus appears to depend on the availability of a suitable engine or engines. The EIS date would be expected to be at least seven years, if not eight, from this point. There is unlikely to be a shortage of prospective launch customers, but many will have already replaced their current mid-market fleets by 2025 or 2026. Thus the prospects for the aircraft seem to depend more on offering something new to the market, in terms of operating costs and payload-range capability, to satisfy industry growth.

Flight Ascend Consultancy has published a more in-depth report into the mid-market sector, including a forecast for the NMA and discussion on the issues facing Boeing and potential competitive response from Airbus. Please visit www.flightglobal.com/mom for more details.

Richard Evans is a senior consultant at Flight Ascend Consultancy