ANALYSIS: Effects of the ban on China-South Korea group tours

The recent ban on tour groups to South Korea introduced by the Chinese government, which came into effect on 15 March, followed China's opposition to the deployment of the US Terminal High Altitude Area Defense (THAAD) missile system in South Korea amid increased tensions with North Korea.

There have been immediate consequences for South Korea's tourism and retail industries, especially as tourism from China to the country rose 32% last year. The ban is also sending shockwaves through the region's airline industry and their investors. Political events usually have a limited, short-term impact on demand, but when it comes to such a large, dynamic market, the consequences need to be looked at across the region.

Since 2014, we have seen China-South Korea move ahead of China-Hong Kong as the largest destination pair in the Asia-Pacific market by seat capacity. In 2016, the largest Asian country pairs by total seats were China-South Korea, followed by China-Thailand and China-Japan. The China-South Korea market has seen seat capacity double to 23.8 million (two-way) in 2016, compared with 10 years ago. Major growth occurred in the last five years, when the five-year compound annual growth rate was 12.7%. A number of factors have driven the growth of the market, and these include robust income growth and expansion of China's middle class, the popularity of Korean pop culture and fashion, and the ease of obtaining visas for Chinese citizens.

The China-Japan market showed a decline in capacity during 2006-2013. The period was affected by political tensions, problems for Japan Airlines and a change in tourism perceptions following the Tohoku earthquake/tsunami and Fukushima nuclear incident. Growth since resumed at a double-digit level for 2014-2016, with 19.4 million seats offered in the China-Japan market in 2016. China-Thailand is another interesting market that developed with a 10-year CAGR at 20.35% in terms of seat capacity, and has quickly become the second-largest country pair in Asia with seat capacity at almost 20 million in 2016. 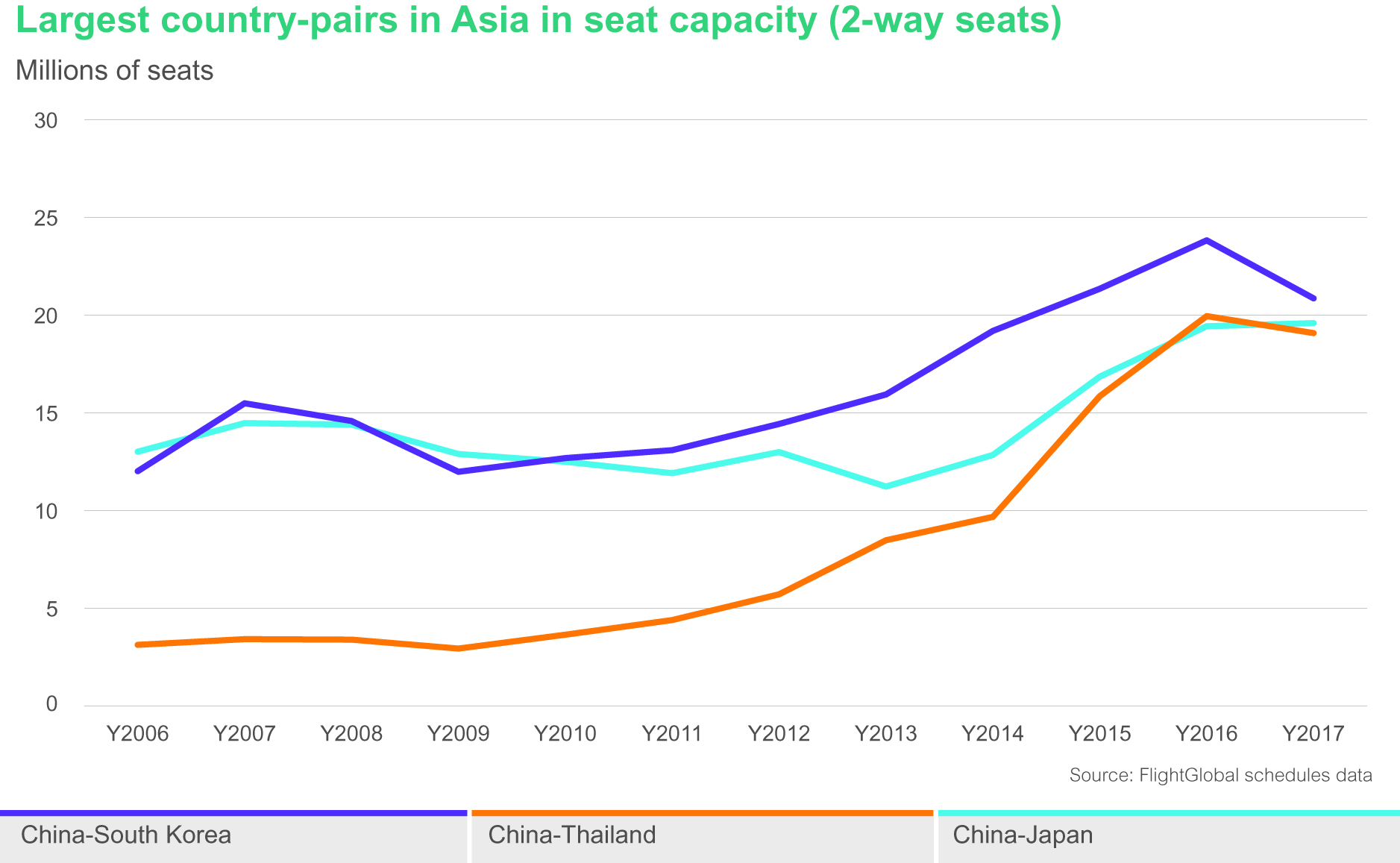 Korean tourism statistics show an inbound tourism market mainly contributed by travellers from East Asia and the Pacific, in which China as a single country has taken around 50% of market share. The Chinese tourism traffic fell to 330,000 in November 2016 after China first opposed the deployment of THAAD. It then ticked up in January and February 2017 to above 430,000 per month. 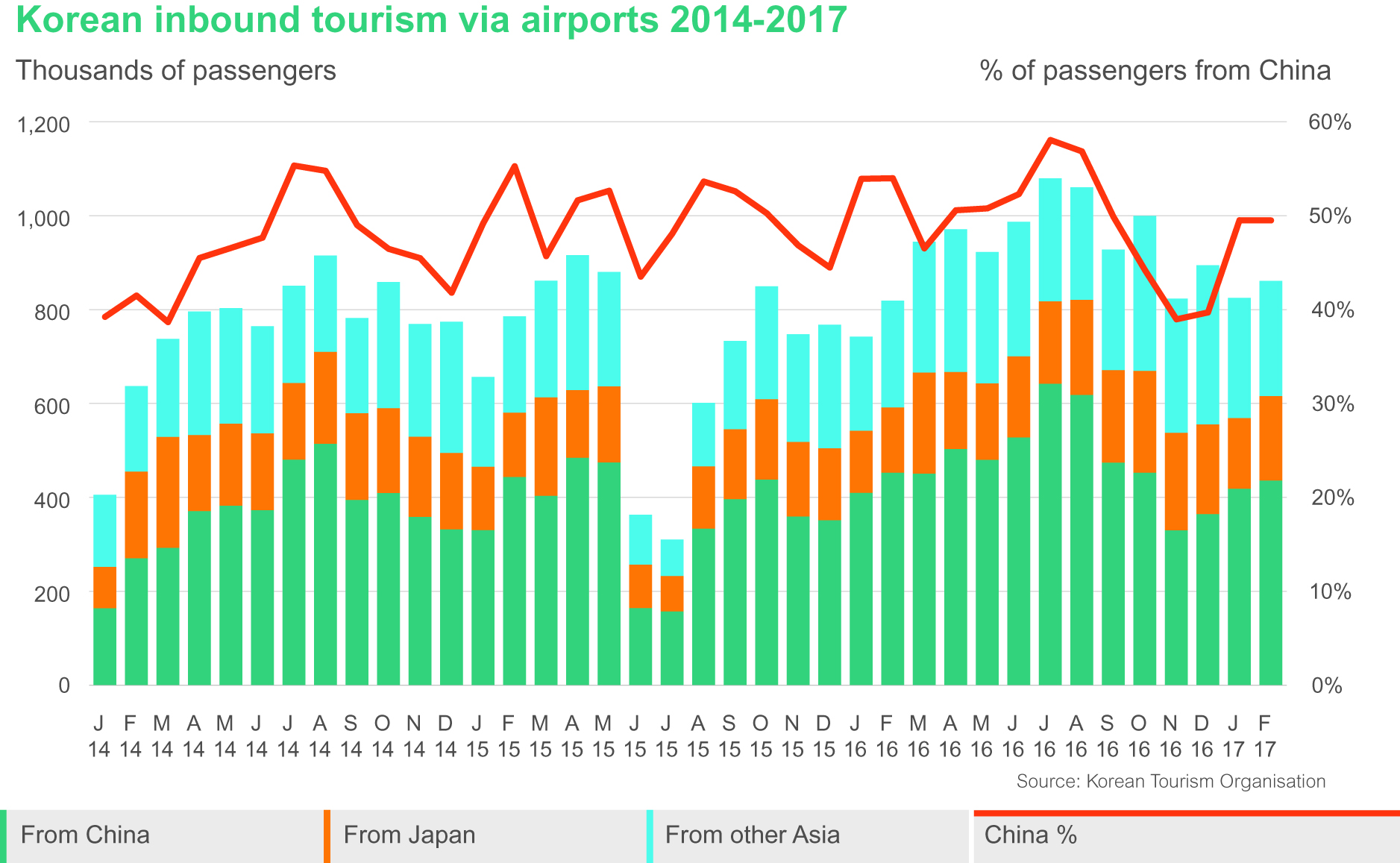 To some extent, this suggests that the demand for travel between the two countries is still robust, as long as the required capacity is still offered to the market. The chart below gives a more detailed look at the impact of Chinese airlines cutting capacity since March. However, over the last 10 years a more notable cutback in South Korea's tourism industry was seen during the outbreak of the Middle East respiratory syndrome (MERS) in mid-2015, when inbound traffic shrank by more than half. 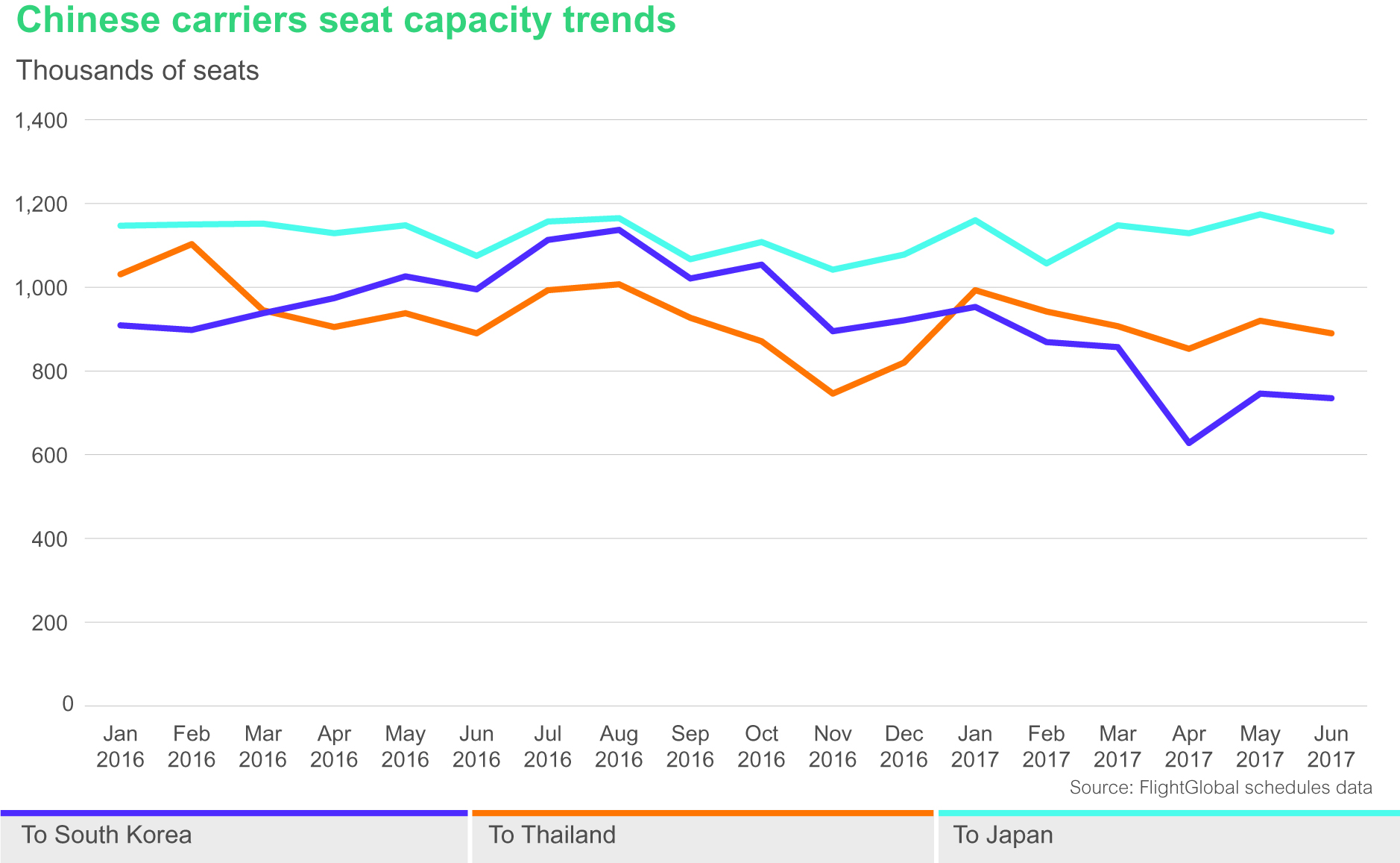 From 15 March 2017, the China National Tourism Administration started to forbid both online and offline travel agencies from selling group tours to South Korea. The Chinese government has also instructed the nation's airlines to reduce the number of round-trip flights operated to South Korea. By looking at the schedule changes in April 2017, we recorded 1,086 flights cut, which led to a 22% market shrinkage, compared with the previous month. Clearly the island of Jeju has been affected most, with 408 flights slashed, most of them connected to the secondary market in China. The big-three carriers in China, as advised by the government, have removed 596 flights to South Korea in total. Korean airlines have also cut flights significantly in April amid sharp declines in inbound Chinese travellers.

Nevertheless, it is worth noting that major business cities like Beijing, Shanghai and Seoul are much less vulnerable to tourism capacity cuts, which indicates that Chinese airlines still see the Korean market as strategically important and do not want to lose already limited slots in Seoul. As group tourism travel has been banned anyway, it makes sense to cut the capacity supplied to the tourism market for the short term.

A look at the forward capacity schedule suggests where the Chinese carriers are redeploying this capacity. It seems they have shifted some capacity to the Japanese market and Southeast Asia, particularly Vietnam. The future capacity in the China-South Korea market suggested a recovery into June.

Even before China imposed the travel ban, the Korea Tourism Organization (KTO) was worried that South Korea's tourism industry was overly reliant on Chinese tourists and was seeking to diversify its customer base beyond its largest neighbour. These efforts are likely to be accelerated under the current circumstances. KTO disclosed plans to strengthen its marketing efforts in markets where its performance lags behind, such as Southeast Asia, the Middle East and throughout the Americas.

At the time of this analysis, it seemed that the travel ban from China to South Korea had already hurt the market. In the past, political tensions between Asian countries have come and gone, and the market has been ultimately been driven by economic and tourism fundamentals. It is these that the airlines ultimately look to address.

To some extent, the airlines and tourism authorities in both countries will use the opportunity to diversify into other markets, although the sheer scale of the Chinese tourism market is a big loss to South Korea. Of necessity, both China and Korea will say they do not want to concentrate too much on one market, and both sides have launched diversification campaigns. Therefore, it is critical for an airline or a destination market to diversify their market opportunities in order to achieve future business stability. It is also essential for airline investors to understand the airline's risk management capability to succeed in an increasingly competitive and complex business environment.