Thirty years ago this week, Airbus delivered the first Airbus A320. This was a landmark event in the European manufacturer's evolution from niche player to a truly global producer of airliners.

Since that first A320-100 (F-GFKA) was handed over to Air France at a ceremony in Toulouse on 28 March 1988 (below), Airbus has developed the original 150-seat version into a four-product family seating between 100 and 240 passengers (depending on cabin configurations). It has delivered just over 8,000 aircraft during those three decades, and holds a backlog for over 6,100 more. 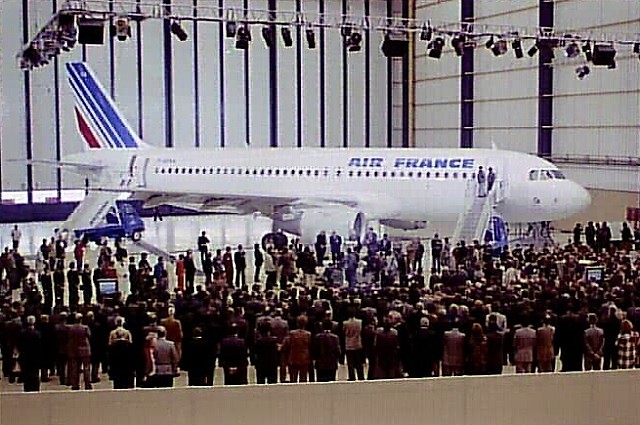 The A320 was revolutionary at the time, introducing digital fly-by-wire technology on airliners and an advanced flightdeck design incorporating sidestick controls and multiple display screens in place of traditional mechanical instrumentation (below). 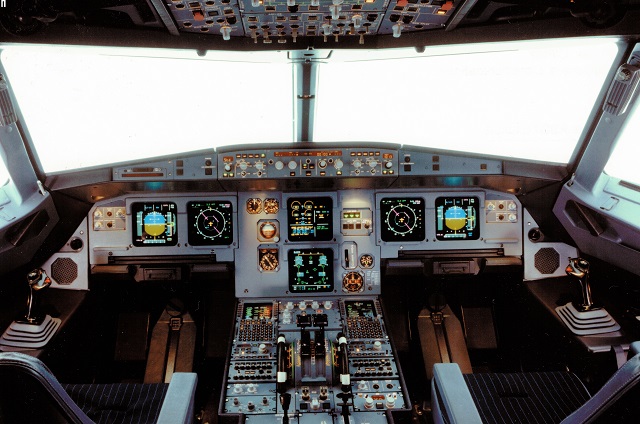 Flight International's then editor-in-chief Mike "JM" Ramsden attended the delivery celebration at the Aerospatiale plant at Toulouse-Blagnac airport. He reported that that first A320, named Ville de Paris, was then flown "down the Champs-Elysees at 1,500ft".

Ramsden's report on the delivery stated that the airliner had "an unequalled record in terms of sales before service entry: commitments total 486 from 19 airlines". 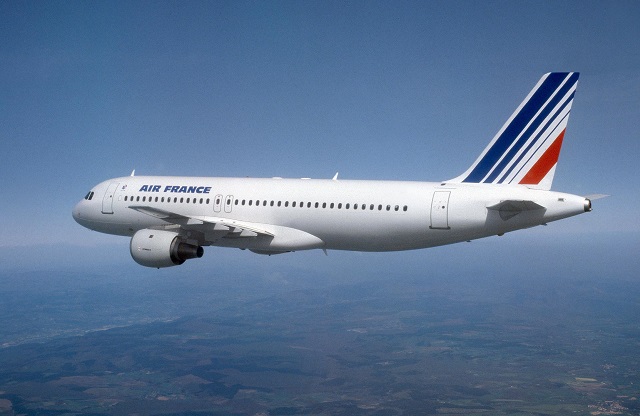 Through a twist of fate, British Airways – which had never placed an Airbus order at that time – found itself a joint A320 launch customer with Air France. This was as a result of BA's takeover of British Caledonian, which had been an early adopter to the fly-by-wire Airbus single-aisle. The airline was absorbed into BA shortly before the delivery was due, but not before several A320s were painted up in its distinctive "golden lion" livery (below). 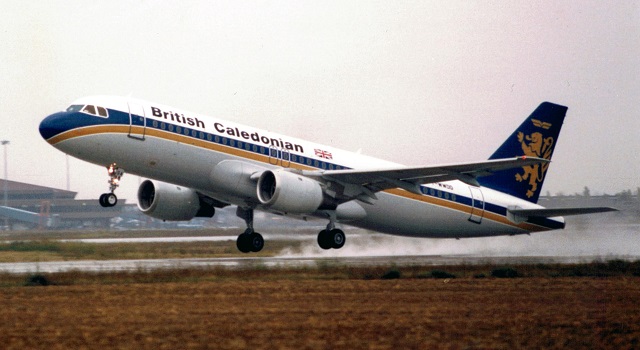 The result of all this was that BA's chairman Lord King was in Toulouse shortly after the Air France handover to collect his airline's first A320 (G-BUSB), which was then flown to BCAL's old London Gatwick hub, where the inherited Airbus fleet was initially based.

It would be another decade before BA ordered its first Airbuses in its own right, through a landmark deal signed in August 1998 for 188 A320-family aircraft. 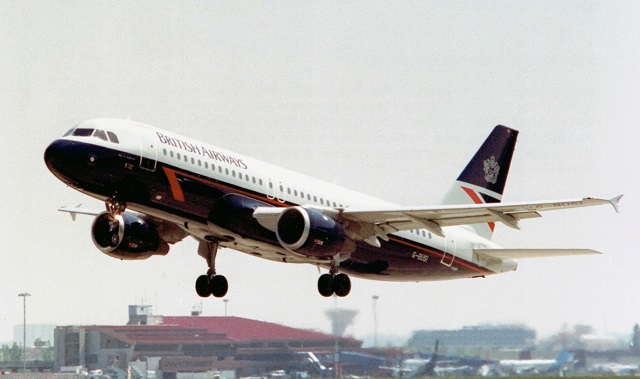 At the time of the first A320 delivery, Airbus was already studying a stretched derivative which Ramsden reported was "a candidate for collaboration with McDonnell Douglas". That tie-up never materialised and Airbus went it alone, introducing the 185-seat A321 in 1994. Two years later, the 124-seat A319 "shrink" arrived.

A second shrink, the 107-seat A318 (below) – which debuted in 2003 – turned out to be the runt of the family, with just 80 delivered. An even less successful sub-variant, built for an Indian Airlines contract, was equipped with an unusual double-bogey main gear to facilitate operations from low-bearing strength runways. Just 31 were manufactured.

The CFM International CFM56-5 engine was the launch powerplant and has gone on to power over half of all A320-family aircraft delivered. The bulk of the remainder were equipped with the International Aero Engines V2500. The A320neo refresh was launched in 2010 around new-generation Pratt & Whitney PW1100G and CFM Leap-1A engines, delivering double-digit fuel-burn reductions.

When it arrived in 1988, the A320 went into the lion's den against established single-aisle aircraft from Boeing and MDC. And so begun a three-decade (so far) battle with Seattle's 737 family. 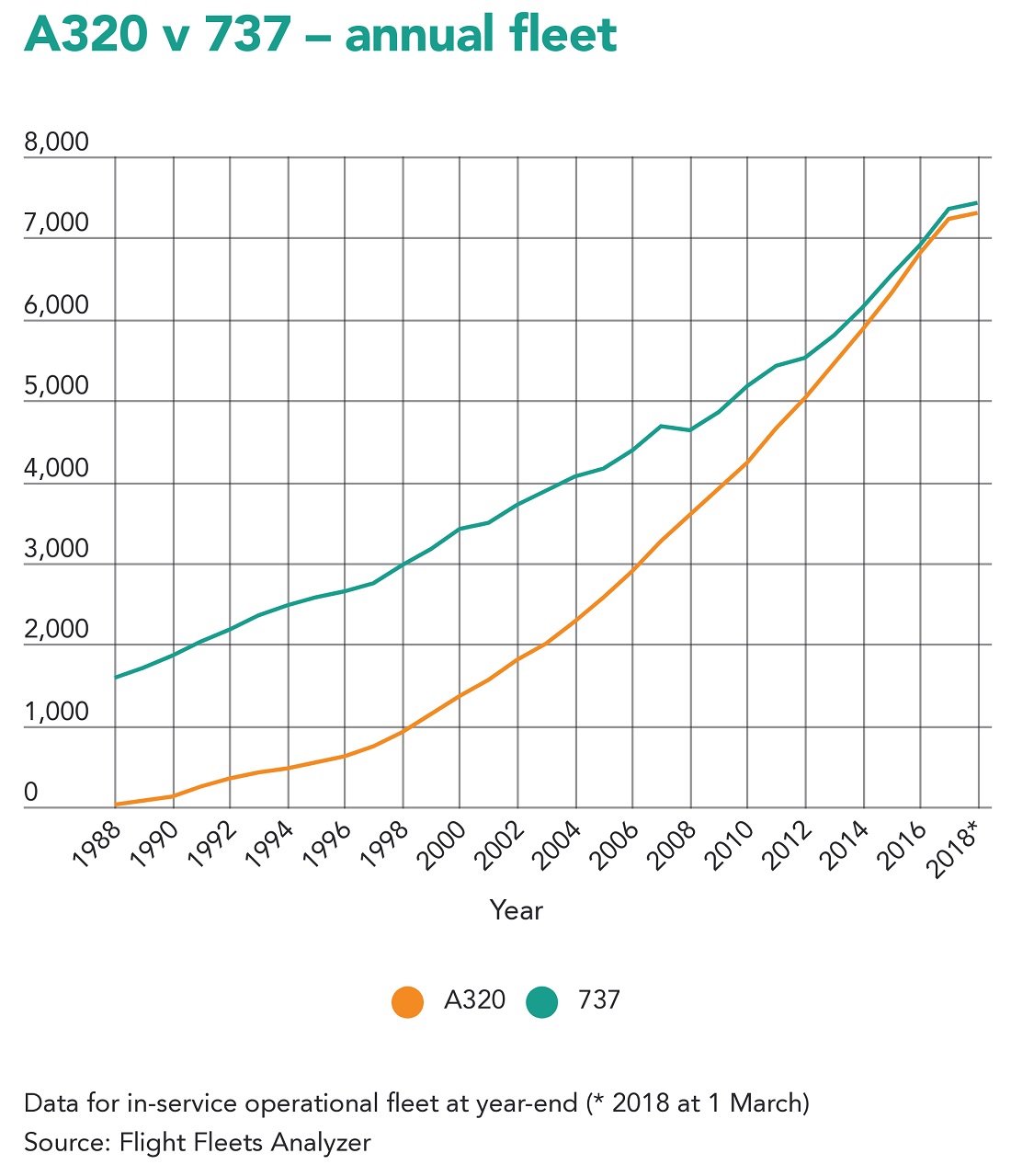 And what happened to that historic first A320-100 to be delivered? Flight Fleets Analyzer shows that Kilo Alpha was contractually delivered on 26 March 1988, and flew with Air France for 22 years. It accumulated more than 44,500h over almost 41,800 flights before being retired at Paris Orly in July 2010 and parted out.