ANALYSIS: What to make of American's local shift in Phoenix

American Airlines is carrying more local passengers at the expense of connecting ones in Phoenix, continuing the debate over the future of its connecting hub at the airport.

Of the roughly 10.3 million passengers that boarded an American flight in Phoenix during the year ending in March, 70% were connecting and 35% were local, the prospectus shows.

American, which acquired the Phoenix hub as part of its merger with US Airways in December 2013, also reduced seat capacity by 6.8% during the two year period ending in June 2017, FlightGlobal schedules data shows. Seats fell another 0.7% during the year ending this June.

The shift towards local traffic adds fuel to the on-going debate over the future of Phoenix in American's network. The Arizona capital sits directly between its Dallas/Fort Worth and Los Angeles hubs, both larger markets and arguably more important ones to the airline due to their status as a fortress hub and gateway to Asia Pacific, respectively.

"Phoenix is an important hub in our network and continues to be designed to connect traffic from the east to the west, and the mountains to the world with directional banks that efficiently connect passengers," American tells FlightGlobal, echoing executives' repeated comments.

A recent bevy of new flights to Dallas/Fort Worth from points west of Phoenix in 2019 raises questions about the hub's east-west connecting flows. The new flights to Bakersfield, Burbank, Flagstaff, Monterey and Yuma – all previously served solely from Phoenix – will offer passengers more connecting opportunities to the eastern USA, potentially siphoning passengers away from Phoenix that could prompt frequency reductions, thus further reducing the connecting utility of the Arizona hub.

This hub "death spiral", as blogger Brett Snyder put it recently in a series on American's Phoenix hub, leads to reductions in other markets from the hub that rely on connections until just routes with strong local demand remain.

Vasu Raja, vice-president of network and schedule planning at American, told Snyder earlier October that Phoenix was no longer the east-west connecting hub for the airline as it was at US Airways, but a "mountains to the world" hub.

Connecting passenger traffic data does not back Raja's claim. The vast majority of American's passengers over Phoenix were travelling east-west during the year ending in June 2018, US Department of Transportation data shows. Of those originating in the east or midwest, 76.9% were travelling to the West Coast, Alaska or Hawaii; while traffic originating on the West Coast, Alaska or Hawaii were more split with 60.7% travelling to the east or midwest, and 28.6% to the southwest, including Arizona, New Mexico and Texas. 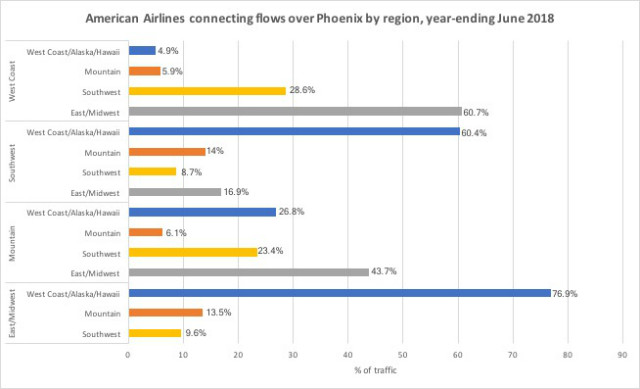 The mountain region, including Colorado, Idaho, Montana, Nevada, Utah and Wyoming, was the destination of only 13.5% of travellers from the east and midwest, and 5.9% of travellers from the West Coast, the data shows. In addition, only 6.1% of passengers originating in the region were flying American over Phoenix to other destinations in the region.

The DOT data also shows that, of the 4.26 million connecting passengers American carried over Phoenix during the year ending in June, only 9.8% originate in the mountain region compared to two-thirds from either the West Coast, east or midwest.

American's network backs up the data. Despite Raja's "mountains to the world" hub comment, the airline serves more destinations in the region solely from Dallas/Fort Worth than from Phoenix, eight compared to just one, FlightGlobal schedules show.

In addition, the additions of Flagstaff and Yuma flights to Dallas/Fort Worth further undercut Phoenix's status as a connecting hub within the southwest for American.

The Phoenix airport is also concerned about the future of American's hub. In the prospectus, it uses a "substantial hub 'downsizing'" by American as its "stress test" scenario to forecast passenger traffic growth through 2023. This case assumes the airline significantly reduces the number of connecting markets it serves over Phoenix and instead focuses on the local market.

Phoenix remains a large market for American, despite these questions. The airline will begin its first-ever international long-haul nonstop from the airport next year, with seasonal service to London Heathrow from March-October 2019, and it will add new seasonal service to Grand Rapids (Michigan) and Madison (Wisconsin) this winter.

Sky Harbor, for its part, remains optimistic about its growth prospects. The airport is in the midst of a $2.03 billion capital plan that includes the modernisation of terminal 3, a new eight-gate terminal 4 concourse for Southwest Airlines, and an extension of its automated train system to the rental car centre, through 2023.

The airport forecasts compound annual passenger growth of 1.2% through the fiscal year ending in June 2023, the prospectus shows. The main driver of this growth, however, is a planned expansion by Southwest, its second largest carrier.

American had a 46.6% share of passengers and Southwest a 34% share in Phoenix during the fiscal year ending in June 2018, the data shows.