FARNBOROUGH: CFM looks to another Leap forward at Farnborough

A former GE Aviation sales executive named Kevin McAllister scored the launch order for the Leap-1A engine at the Paris air show in 2011.

Seven years later, McAllister is the chief executive of Boeing Commercial Airplanes and the Leap-1 engine family is the second-most ordered jet engine in history, with its orderbook of more than 15,300 engines trailing only the 44-year-old CFM56 franchise.

As the GE/Safran Aircraft Engines joint venture enters the Farnborough air show, the only doubt about its ability to score more orders is the sheer size of the next-generation product's backlog. Orders for single-aisle aircraft now measure several times the annual production capacity of Airbus and Boeing combined. Despite the size of that backlog, CFM chief executive Gaël Méheust hints that Farnborough week could see yet another wave of new engine orders.

"Yes," he says. "We will announce a few things at Farnborough."

The current backlog of Leap engines is based on orders for installed and spare units for 7,140 aircraft, including 2,306 A320neo family aircraft with Leap-1As, 4,527 Boeing 737 Max aircraft powered by Leap-1Bs and 307 orders for the Leap-1C-driven Comac C919, according to Flight Fleets Analyzer.

Of the three Leap-1-powered aircraft, CFM competes for orders only on the A320neo. It is a familiar position for the Franco-US alliance. Since the late 1980s, the CFM56 has competed to power the original A320 family against the International Aero Engines V2500, winning a market share of roughly 60%. Airbus launched the A320neo family nearly eight years ago, collecting orders for 6,137 aircraft to date, the Analyzer data shows. Nearly two-thirds of those orders – amounting to 3,935 aircraft, or 7,870 engines excluding spares – have selected engine suppliers.

In a remarkable coincidence, the split of orders between the Leap-1A and the Pratt & Whitney PW1100G geared turbofan remains almost the same as that between the CFM56 and the V2500. Airlines and lessors have ordered 2,306 Leap-1A-powered A320neo family aircraft, accounting for 58.6% of all orders with engine selections to date, according to the Analyzer.

More importantly, to Méheust's point, slightly more than one-third of the A320neo family aircraft in the Airbus backlog do not have engines selected yet, providing a deep reserve of potential orders in future. The unannounced backlog includes dozens of aircraft ordered by existing Leap customers, including Frontier Airlines, Avianca and Qatar Airways. 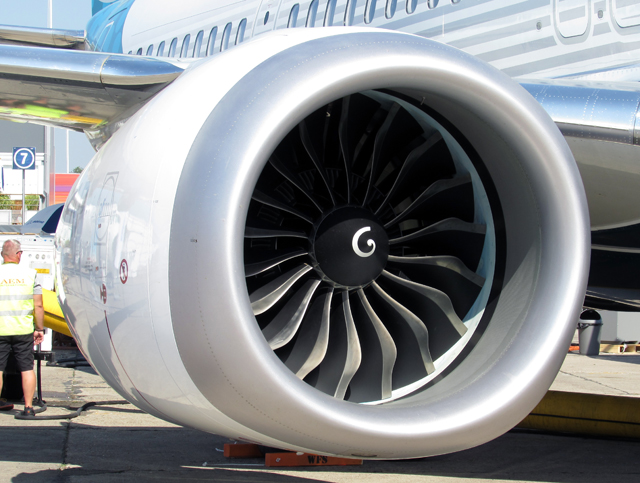 There are orders for 4,500 Leap-powered Max aircraft

"One-third of [A320]neos haven't decided for an engine yet, so the potential for more engine campaigns is very important," Méheust says. "But it's important for the Max, too. Other airlines are adding aircraft to their initial orders, so we don't see any form of slowdown in the rhythm of orders right now. It's kind of puzzling because we have been in that crazy mode since 2011 and we are in 2018."

Indeed, CFM signed orders for more than 1,300 Leap engines in the first five months of this year, Méheust adds.

It did not always appear as though the Leap-1 engine would prove so successful in the market, though. On 13 July, CFM celebrated the 10th anniversary of the launch of the Leap-1 engine family, which occurred on the eve of the 2008 edition of the Farnborough air show. It was the same event that saw the launch of the then-Bombardier CSeries aircraft with a variant of the P&W geared turbofan engine family. Airbus and Boeing still seemed on the fence about re-engining the A320 and 737 families or starting over with clean-sheet aircraft designs and new engines.

In CFM’s launch announcement for the Leap engine, the joint venture also straddled the line between a full commitment and a careful hedge.

"We are excited about this new engine, but we also think we need to remain flexible," then CFM president Eric Bachelet said in 2008. "If fuel prices continue to rise, we will need to raise the bar even higher and introduce even more advanced technology." The new technology Bachelet had in mind was an open rotor engine.

The other option available in 2008 was offered by P&W. By inserting a reduction gear between the low-pressure turbine and the inlet fan, P&W had designed an architecture that could expand the bypass ratio of a turbofan engine to 12:1, more than twice the ratio achieved on the CFM56. In a single stroke, it appeared to make a conventional turbofan architecture obsolete.

"In 2010, everybody was talking about this amazing engine with a gear that would change the face of the world. Time magazine made it their invention of the year in 2010," Méheust recalls.

Instead of following P&W's lead with a geared turbofan, CFM doubled down on the conventional architecture. By leveraging 3D-woven resin transfer-moulded fan blades invented by Safran and new high-temperature materials developed by GE, CFM put together a Leap turbofan engine design that initially met some scepticism from the market.

Méheust remembers CFM’s arrival at the 2011 Paris Air Show. The Leap engine family had been launched three years earlier, but was still waiting for a launch order. By the same date, P&W had won orders for more than 500 PW1100G-powered A320neo family aircraft. McAllister landed the launch order from Virgin America. Shortly afterward, Méheust, then the top sales executive for Safran, secured an order from SAS. It was just the beginning.

"By the end of that air show we had sold [engines for] 910 airplanes," a CFM spokeswoman says. "That’s the point where we took the lead and never relinquished it."

The Leap engine is not quite up to full speed yet. A barrier coating on a high-pressure turbine shroud suffers from a durability shortfall, requiring CFM to repair the coating on all engines delivered during the first year of production. Production yields by CFM's castings and forgings suppliers are too high, putting the Leap engine production months behind schedule until a planned catch-up by year-end.

The next decade will prove the ultimate winner in the engine competition, but the Leap now has a firm foundation.

"We knew that we were having the right response to the market," Méheust says. "We knew we had the right architecture – the architecture that would provide the performance, but also the reliability."