India is to begin manufacturing an indigenous derivative of AeroVironment’s family of small unmanned air systems, dubbed the “Cheel”.

The Cheel will be co-developed by AeroVironment and Indian company Dynamatic Technologies in a production facility in Bangalore that was inaugurated on 17 February.

“The governments of India and the USA have selected a next-generation unmanned aircraft system based on AeroVironment’s market-leading family of small UAS as a collaborative project under the India-USA [Defence] Technology and Trade Initiative,” a statement from Dynamatic says.

“The project, named ‘Cheel’, will be jointly developed and produced by Dynamatic Technologies and AeroVironment in India, subject to applicable US and Indian government approvals.”

The Cheel pilot production facility will house an advanced avionics and communications laboratory, as well as facilities for payload development, composites, and assembly and testing for the UAVs.

This announcement follows earlier speculation that US President Barack Obama was to agree to a series of technology transfers for India following his visit to the country in January.

It was reported that an indigenous variant of AeroVironment’s Raven UAV would be developed, but the February announcement from Dynamatic does not cite a specific template. Rather, it says that technology from the company’s family of small UAVs – including the Puma, Raven, Wasp and Shrike – will be incorporated. 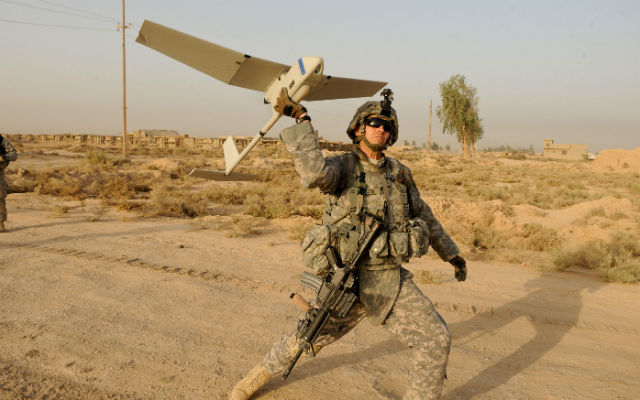 A teaming agreement between the two companies was signed in 2013 to best position the companies for a number of opportunities with potential Indian customers, including the Ministry of Defence and the Ministry of Home Affairs, Dynamatic says.

Meanwhile, General Atomics Aeronautical Systems confirmed to Flightglobal in February that the US government had granted a DSP-5 export licence to the company so it could begin pitching its Predator XP UAV to India.

The UAV is derived from the ubiquitous armed MQ-1 and MQ-9 Predator series of UAVs, but is designed specifically for the export market, so does not have the payload capacity to be armed.