Northrop Grumman will continue to sustain and modernise all variants of the US Air Force's RQ-4 Global Hawk unmanned air vehicle under $3.2 billion of announced funding.

The Global Hawk will eventually be the sole provider of high-altitude, long-endurance surveillance for the air force, replacing the manned Lockheed Martin U-2.

The USAF has pushed back the U-2’s planned retirement from 2016 until 2019, giving it more time to upgrade the Global Hawk before finally retiring the ageing type. It is not clear, however, which modernisation activities will be covered under the $3.2 billion allowance. 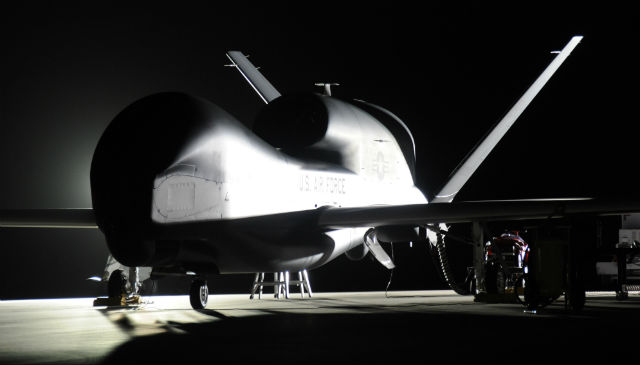 Proposed future modernisation efforts for the Global Hawk include a universal payload adaptor, which would carry various sensors imported from the U-2, including the United Technologies Aerospace Systems (UTAS) optical bar camera and SYERS-2C radar.

A co-operative research and development agreement for the payload adapter was signed on 14 July with the USAF which will lead to a demonstration, expected to take place with a UTAS MS-177 multispectral sensor.

The USAF’s Scientific Advisory Board also suggested in August that the RQ-4 could be upgraded with technology such as radar warning receivers, and have new weapons integrated, to provide more capability. The board says that adding readily-available sensors, weapons, and threat detection and countermeasures equipment to the RQ-4 – plus the General Atomics Aeronautical Systems MQ-9 Reaper – could provide better situational awareness and enable the aircraft to be deployed on more risky operations in future.