An Israeli Aerospace Industries/Airbus Defence & Space team is counting on the release of a request for proposals (RfP) from the German government for a replacement unmanned air vehicle before year end, ahead of a planned election in 2016.

It is awaiting the release to offer the upgraded Heron TP – the incumbent German air force system is the IAI Heron 1 variant – that it is pitching against a General Atomics Aeronautical Systems/RUAG team that is vying for the tender with the former’s MQ-9 Reaper.

“We hope to get a decision on the release of an RfP by the end of the year,” Thomas Reinartz, managing director of Airbus Defence & Space’s airborne solutions division, says, noting that a delay in the RfP release to after the election could result in a suspension of some two years. 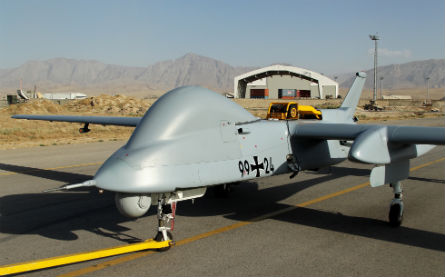 The Heron 1 leasing effort began in 2010, and in April this year an extension was negotiated to potentially take the operation of the UAV up to 2017 - it is guaranteed until February 2016, but uncertainty surrounds whether this will continue to 2017 depending on the election results.

Either way, there will be a gap of a couple of years between the current end date of the Heron 1 leasing contract and the start of a contract to introduce its replacement, so another Heron 1 extension could be negotiated.

This programme would serve as a bridge until a pan-European medium altitude, long endurance UAV is brought into service in around 2020.

In parallel to this, a decision is also expected to be made at the end of the year regarding the continuation of the contingency effort of the German forces in Afghanistan, where the Heron is still operating.