According to Rafael, the Drone Dome is aimed at countering UAVs that could perform aerial attacks or carry out surveillance they are not authorised to.

The all-weather Drone Dome has 360° circular coverage, and uses an electro-optical/infrared sensor and radar to detect a threat. The data is then combined and correlated and alerts the operator of the hostile UAV.

The system initiates either an automatic interference operation – as per pre-defined rules – or it is carried out manually by the operator. The threat is neutralised by activation of directional GNSS and a radiofrequency inhibitor/jammer. 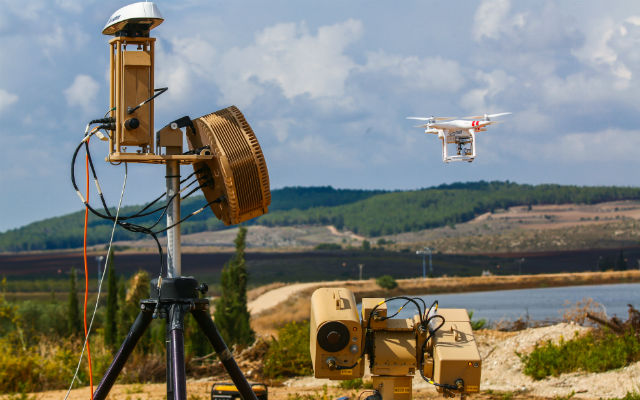 According to Rafael, Drone Dome has a quick response time and causes minimal collateral interruptions to the surrounding urban environment.

Portable jammers are offered by many companies, including Israel Aerospace Industries and Rafael.

The systems are designed to detect all types of UAV, including micro and mini systems, jamming their control links.

In recent months, Israeli UAV manufacturers have been approached by customers that want anti-jamming capabilities on UAVs.

The demand is for two main types of system: one that can protect UAVs in a given area, and another which is carried by every UAV so it can be used for long-endurance missions.

In the recent Armenian–Azerbaijani border conflict over the Nagorno-Karabakh region, there are indications UAV jammers were used by Armenia. Sources add, Azerbaijani forces may have jammers and both sides probably use Russian-made systems.

Russia has developed advanced jammers that, with adaptations, can be used against UAVs.

Israeli UAVs such as the BlueBird ThunderB and IAI Harop loitering munition have reportedly been used during the conflict, with one of the former shot down in early April.