Raytheon BBN is developing technology to direct and control swarms of small, autonomous air and ground vehicles, as part of DARPA’s Offensive Swarm-Enabled Tactics, or OFFSET, programme, the company announced on 26 March.

The software allows users to drag and drop the creation and manipulation of tactics, and provides a game-based simulator to evaluate swarm tactics. The company also developed a physical swarm testbed to perform live tactics evaluations. Users can coordinate drone behaviors in teams composed of different vehicle types that use various sensors, Raytheon says.

"Operators use speech or gestures to control the swarm. This is a tremendous advantage during operations," says Shane Clark, principal investigator on the programme. "The system provides sensor feeds and mission status indicators for complete situational awareness." 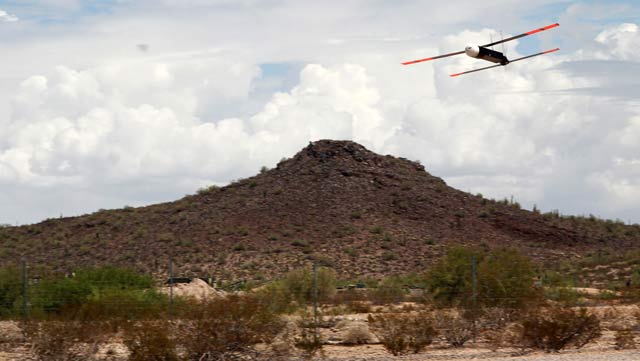 Raytheon demonstrated in 2016 that it could net together 30 Coyote UAVs in a swarm, as a part of the Office of Naval Research’s Low Cost UAV Swarm Technology, or LOCUST, programme.

As part of the OFFSET programme, DARPA is also inviting additional organizations to create novel swarm tactics and work with Raytheon to evaluate the tactics in simulations and possibly for live trials.