Announced during Singapore air show on 18 February, the contract will cover the acquisition of two solar-powered, long-endurance surveillance unmanned air vehicles, the first of which is already under construction.

Under the terms of the contract – believed to be worth some £10.6 million ($15.5 million) – Airbus will manufacture and fly the two aircraft, and a first flight is expected in 2017.

The UAV operates at altitudes of around 65,000ft for long periods of time, and it is expected that it will be utilised as a surveillance and communications relay link for ground operations, although Airbus says that the MoD’s intent regarding its operation is undisclosed. 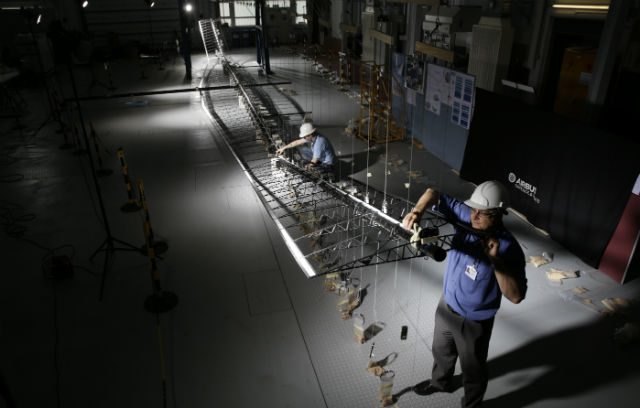 The Zephyr 8 during stress testing

Meanwhile, Phillip Dunne, UK minister of defence for procurement, said during the show that the nation is well-positioned to provide equipment to the Asia-Pacific region, which was bolstered by the UK’s commitment to defence spending following the release of its security review in November.

While the US is a key equipment provider to the region, Dunne notes that the UK is the second largest defence exporter to Asia, where defence budgets are also increasing.

Large equipment procurements are not necessarily the only avenue into the market, he adds, but broader capability discussions are underway.

Stephen Phipson, head of the Defence and Security Organisation within the UK Trade and Investment division, adds that the rise of indigenous fighter programmes in the Asia-Pacific is an area where the UK can provide sub-systems.

Malaysia operates the Airbus A400M transport – a common capability with the UK – and displayed its most recent delivery of the type at the show. Additionally, Royal Air Force Eurofighter Typhoons will be deployed to Japan this year in support of joint exercises.

Get all the latest news, analysis and opinions fromSingapore Airshow on our dedicated show page