A recent flight of the US Marine Corps’ Insitu RQ-21A Blackjack unmanned air vehicle from MCAS Cherry Point in North Carolina has demonstrated the system’s ability to fly under air traffic control alongside manned aircraft.

The USMC’s UAV Sqn 2 – VMU-2 – flew its Blackjack into US class D airspace over the base on 21 March, opening up the operational envelope of the type away from restricted sites.

“Commonly only allowed to fly in restricted airspace, VMU-2 now has the expanded ability to integrate RQ-21A flight operations with manned aircraft over this air station,” the USMC says.

The class D airspace around MCAS Cherry Point has a 5 mile radius from the air station on the ground up to 2,500ft, and is under the jurisdiction of air traffic control that balances the flow of military traffic as well as arriving and departing commercial flights.

The UAV was operated throughout the flight by a ground-based pilot under the instruction of ATC. If the communication link had failed the RQ-21A would have followed a predetermined route back to safety, the USMC says.

“Unmanned aerial systems like the Blackjack are commonly flown from forward sites that sometimes restrict our integration with other air players and events,” says 1st Lt Orlando J Benedict, from VMU-2. “Having the RQ-21A at MCAS Cherry Point fosters connections with the rest of the 2nd Marine Aircraft Wing and allows for procedures that integrate manned and unmanned aviation to be solidified for the future.” 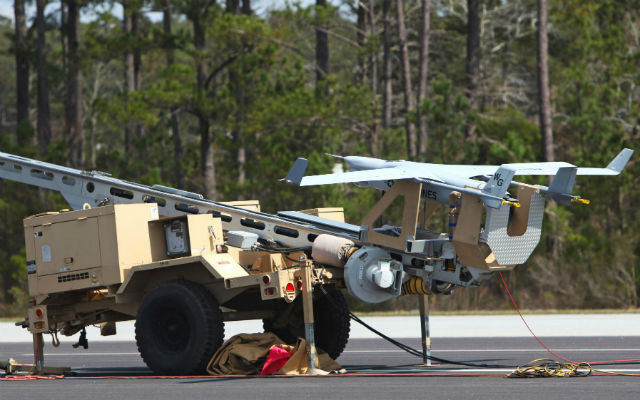 The Blackjack is designed to operate with a Marine Expeditionary Unit in support of ground forces deployed worldwide, but the service says that UAV requirements have evolved, and that it “has refined its concept of operations to incorporate rapidly emerging technologies in its unmanned systems."

"The ability to do so is an intricate process involving FAA [Federal Aviation Administration] requirements that demand UAVs to garner an equivalent level of safety and aircraft separation, comparable to manned aircraft,” the service says.

It adds that the new capacity to conduct flights at Cherry Point will provide “a more fluid ability to maintain, test and hone specific skills” that are required to operate the system without having to travel to other military sites, as was previously required.

“Marine UAS are flown and treated like any other aircraft – the only exception is that the pilot at the controls is not physically located in the plane, but they are very much still in control,” says 1st Lt Jeremy Eshleman, a UAS officer and weapons and tactics instructor with VMU-2.