Bucharest could spend around $175 million on a modernisation and support programme for its secondhand fleet of Lockheed Martin F-16 fighters, after securing US Department of State support for the transaction. 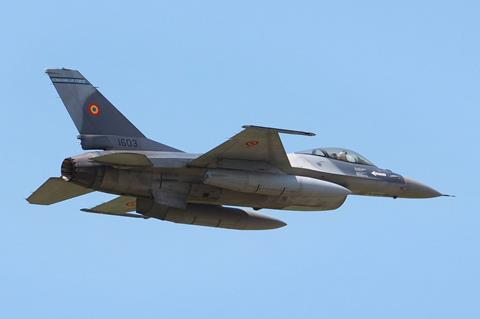 The DSCA says that, if implemented, the work will “improve the security of a NATO ally in developing and maintaining a strong and ready self-defence capability”. It also would enable the Romanian air force to “meet interoperability requirements for encrypted communications systems used by NATO forces”, it adds.

Cirium fleets data shows that Romania has 11 Block 15-standard F-16A fighters in active use, plus a trio of B-variant trainers. The assets were acquired from Portugal, as it downsized its air force inventory of the type, with a further three yet to be transferred.