The KC-390, Embraer’s clean-sheet aerial refueling tanker, flew for the first time on 3 February from an airfield in São José dos Campos, Brazil.

"The KC -390 behaved in a docile and predictable manner," test pilot Mazort Louzada says in a statement. "The advanced system of fly- by-wire flight controls and the latest generation avionics facilitate piloting and provide smooth and accurate flight."

Embraer chief executive Frederico Fleury Curado says development of the KC-390 is “most likely the greatest technological challenge that the company has faced in its history”. 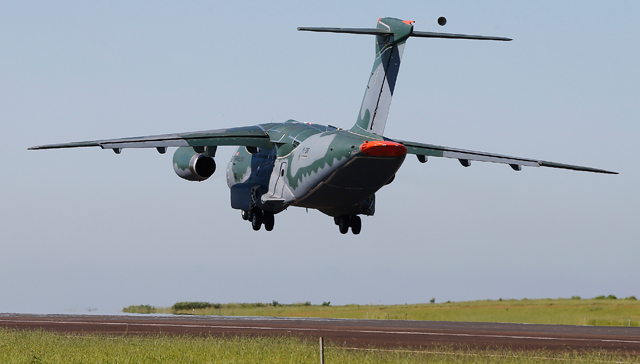 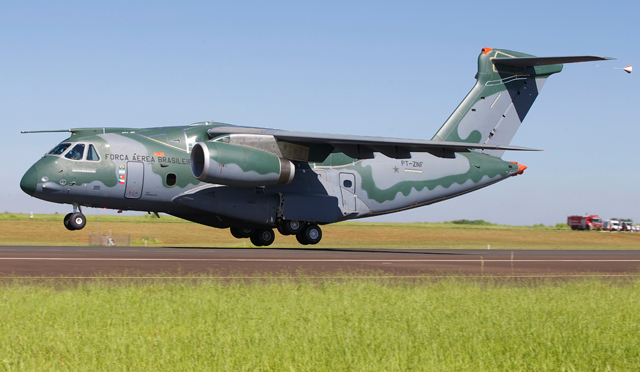 The tanker and transport aircraft was designed and built from scratch by Embraer in cooperation with the Brazilian air force, which has gone all in on the aircraft becoming the backbone of its airlifter fleet. Company officials are marketing the KC-390 as a successor, if not an upgrade, to the Lockheed C-130.

But the International Aero Engines V2500-powered KC-390 must prove in flight tests that a jet is capable of matching the versatility of the C-130, among other promises Embraer has made of the aircraft. It is only the second application of the IAE V2500 engine, aside from the Airbus A-320. Changes to the engine were made specifically for the KC-390 to "optimize installation" on the airframe. Accordingly, IAE issued a statement congratulating Embraer on the achievement.

"We are incredibly proud to support our partner Embraer in the development of this cutting-edge, world-class military aircraft," IAE says. "We look forward to closely collaborating with Embraer through the next phase of testing to ensure on-time entry into service."

Aside from the Brazilian air force, other nations including industrial partners Argentina, the Czech republic and Portugal have committed to order an additional 32 KC-390s.

"The KC-390 will be the backbone of transport aviation for the Brazilian Air Force. From the Amazon to Antarctica, the fleet of 28 aircraft will play a key role in the diversity of projects of the Brazilian state, from scientific research to the maintenance of sovereignty", Brazilian air force commander Lt Brig Gen Nivaldo Luiz Rossato.

The ambitious project included parallel development of fly-by-wire controls that caused headaches for the company and delayed the aircraft’s rollout.

It originally was scheduled to fly before the end of 2014, but the pace of production on the two test aircraft slowed prior to the first aircraft’s official unveiling in late October.

First flight is an important milestone in the company’s flight test campaign, which must be completed in time to begin deliveries of the KC-390 to the Brazilian air force in 2016. The air force intends to buy 28 examples of the aircraft, which it collaborated with Embraer to develop. Another five nations have signed letters of intent to purchase a total 32 additional KC-390s.

Jackson Schneider, president of Embraer Defense, says “the program continues to advance as planned and the KC -390 has aroused the interest of many countries around the world".