L3 Technologies has introduced its Q400 multimission aircraft at this year’s show, acknowledging a pressing market demand for aircraft to patrol the maritime domain.

Based on the Q400 airliner, the Q400 MMA is being pitched in various competitions. The aircraft is based on the Bombardier Dash-8 Q400 turboprop airliner, but features several major modifications.

L3 has mounted two large fuel tanks on either side of the aircraft, doubling its range and giving it 12h of endurance. A multimission systems bay has been added below the fuselage. This can house payloads based on customer requirements. In addition, there are hard points for weapons. 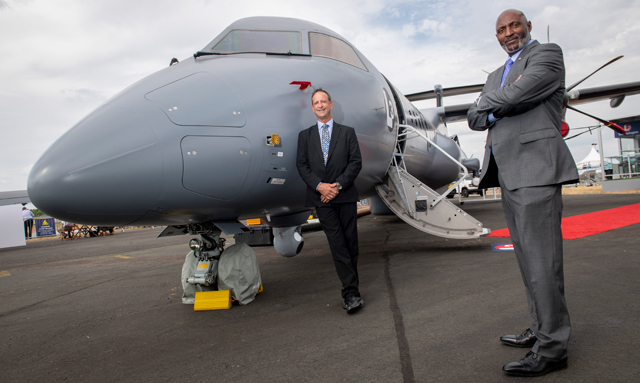 "L3 has modified 1,500 aircraft in its history, so we were able to modify the Q400 without changes to its operating envelope," he says.

Internally, L3 foresees the aircraft having four to six operator stations, as well as a mission planning station. Generally, it expects the aircraft to have a crew of 10.

The company has added an observation window, but unlike other maritime patrol aircraft, this is flush with the fuselage and not a bubble. Conley says that the design of the window itself allows for an excellent view, without disrupting the line of the fuselage.

While the company has done extensive work, it has yet to test the full suite of sensors and weapons from the platform. This work will depend on customer requirements and commitments.

A feasibility study has been undertaken with Bombardier to look at how, if required, the aircraft could be modified for air-to-air refuelling.

Flight Fleets Analyzer shows that the aircraft on static, which bears the registration N404E, was delivered new to FlyBe in 2002, and operated by an airliner until 2012. It spent a few months in storage in late 2012 before being obtained by L-3.