As part of a growing effort to support the US government’s response to coronavirus, the US Air Force (USAF) moved 500,000 swabs aboard a C-17 Globemaster III from an airbase in Italy to the USA.

USAF Air Mobility Command also recently activated a 24/7 Crisis Battle Staff and Operational Planning Team to assess and plan for coronavirus impacts to the command’s regular mission as well as its ability to help with the logistical response to the pandemic, it says on 18 March. 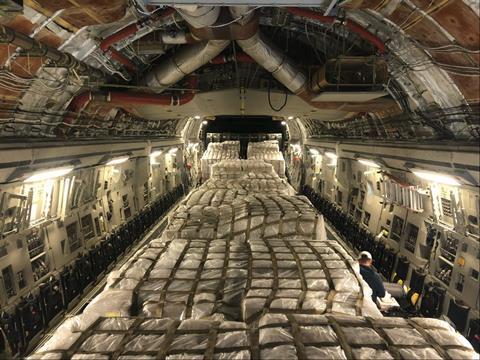 The USAF did not respond to a question about the source of the swabs. The news was first reported by Defense One.

“On March 17, [Air Mobility Command] transported a shipment of 13 pallets of Covid-19 testing supplies aboard a C-17 Globemaster III from Aviano Air Base, Italy, to the Memphis Air National Guard Base where the 164th Airlift Wing C-17 is assigned,” says the USAF. “Air Mobility Command is postured to support additional requests to deliver Covid-19 testing supplies in the coming weeks.”

Upon arrival in Memphis the swabs were loaded onto FedEx aircraft for distribution throughout the USA, the service adds.

Swabs are needed to pull samples from the nose and back of the throat of potential coronavirus carriers. In recent days, as testing for the virus has increased, hospitals have reported shortages of swabs. 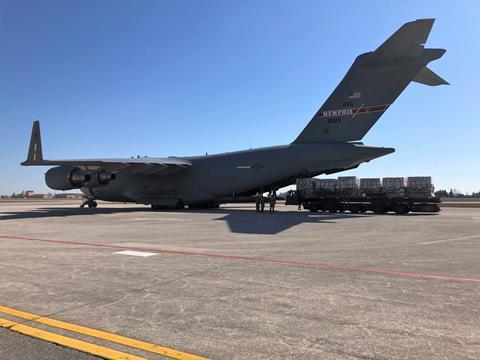 The United States Transportation Command, a joint command of the US armed services, is coordinating with the Department of Health and Human Services (HHS) to handle any other future requests for fast air cargo movements, says General David Goldfein, chief of staff of the USAF, at a Pentagon press conference on 18 March.

The number of people who can be moved in an aircraft depends on the severity of the patient’s illness.

Aircraft fitted with isolation units can transport less than 10 patients at once, adds Goldfein. He declines to say the overall capacity of the USAF, citing national security concerns with ongoing military operations.

However, the service’s capacity is not immediately in danger of being over tasked.

“Right now, we’re not seeing any limitation in our capacity to meet those movement requirements, especially when we’re talking about small test kits where we can put multiple numbers on a large airplane,” says Goldfein. 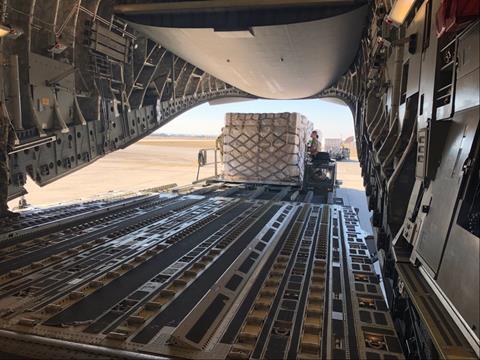 Because USAF aeromedical evacuations are intended for war casualties, the service thinks it will likely not take coronavirus patients. Instead, it would focus on relieving hospitals’ trauma care, such as treating gunshot wounds.

The USAF is looking at all its options, says Goldfein.

“Secretary [of defense Mark] Esper asked all of us, in both a fixed-wing and rotary-wing capacity, what is it that we could bring?” he says. “We have that analysis ongoing.”