The US Navy (USN) is conducting market research for technologies that could be used to air-deliver sea mines over long ranges.

The service says it wants to know which companies are capable of designing, manufacturing and testing aerial sea mines as part of its “Long Range Aerial Delivery of Maritime Mines” request for information, posted on 20 August. 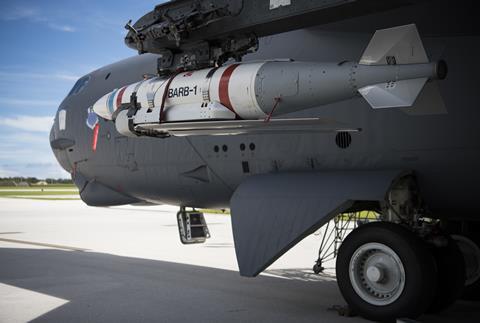 Instead, the service suggests these mines could be launched from aircraft at a safe distance and flown to the target area, presumably within the body of a cruise missile or with the addition of a jet engine and wing kit. The navy wants a weapon that can deliver at least a 227kg (500lb) explosive payload at a minimum range of 100nm (185km). Ideally, it wants a weapon that can carry a 907kg explosive payload beyond 100nm.

The USN is also interested in design concepts that use target-detection, safety and arming devices from the in-service family of Quickstrike sea mines.

Quickstrike sea mines are general-purpose bombs retrofitted with Joint Direct Attack Munition (JDAM) guidance kits and an underwater target-detection device. The sea mines are designed to be dropped from the air and to lay on the sea floor in shallow water – at depths of 12-61m (40-200ft).

The Quickstrike explodes when either a ship’s metal hull passes near the weapon’s magnetic sensor, certain movements are detected by its seismic sensor or particular sounds are picked up by acoustic sensors. Sometimes the sea mines explode when a combination of all three are detected.

Laying Quickstrike sea mines can be difficult and put aircraft close to enemy forces. To maintain a safe distance, the USN has developed the Quickstrike Extend-Range (ER), a variant that includes a wing that allows the weapon to glide to its target. The winged sea mine can glide more than 40nm when launched from 35,000ft, according to the US Air Force.

Because JDAM bombs, upon which the Quickstrike ER is based, are already qualified on so many different aircraft, from the Lockheed Martin F-35A stealth fighter to the Boeing B-52 bomber, the US military has a variety of ways to launch the sea mine.

F-35As can carry two of the largest JDAMs internally. That could allow for the precise placement of sea mines against sophisticated adversaries.

The USN’s Long Range Aerial Delivery of Maritime Mines project comes about six months after Boeing resurrected its Powered JDAM concept in February. That concept adds a small jet-turbine engine to the winged version of the weapon. Boeing previously had declined to state the range of the Powered JDAM, but noted it would be similar to the reach of the Lockheed Martin AGM-158 Joint Air-to-Surface Standoff Missile, which has a range of more than 200nm.

Ultimately, long-range aerial sea mines could be helpful in a number of scenarios for the US Department of Defense, including thwarting a Chinese invasion of Taiwan. Such an assault would require China to carry thousands of troops, as well as tanks and other armoured vehicles, across the 112-mile-wide Taiwan Strait. Mining the harbours and other staging areas where the invasion force would disembark could slow such an onslaught.