While 2018 brought its fair share of airline start-ups and collapses, the year ended with roughly the same number of commercial operators as which it ended 2017.

Figures from Flight Fleets Analyzer show there were 838 airline operators in December compared with the same month in 2017 – an increase of just two airlines.

A total of 430 carriers operate a fleet of more than 10 aircraft – that is 18 more than 12 months ago. Two more airlines entered the 100-plus fleet club during the last year, making 58 in total.

Europe and Asia-Pacific account for the regions with the largest amount of operators – both having 242. North America has just over 100 airlines, reflecting the consolidated nature of the sector in the country. The Middle East has the fewest airlines flying, 41 in operation accounting for 5% of airlines globally.

Figures over the last decade show the extent to which the low-cost carrier sector has expanded. There are now 121 budget carriers flying. That is almost double the 67 that were operating in December 2008. 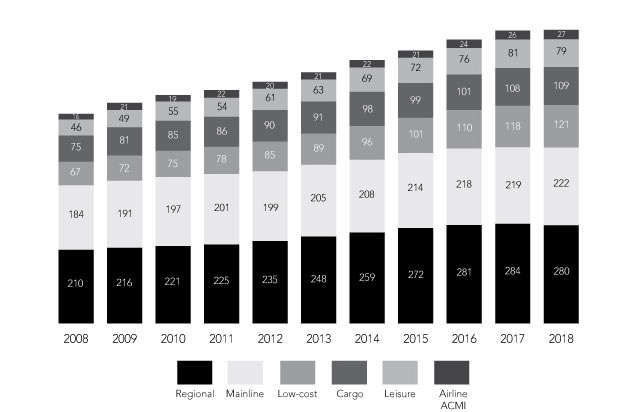 Editor’s note: This is an extract from FlightGlobal Airline Market Review 2018.