INTERIORS: Australia's big two up the ante on domestic mid-haul

Competition in the Australian domestic airline market remains fierce and looks set to stay that way. Driven by a need to retain premium passengers, the country’s two largest carriers are investing more and more resources and marketing effort into routes from the east coast to one key destination – Perth in Western Australia.

There are currently four airlines operating these routes: two full-service carriers, Virgin Australia and Qantas, and their low-cost carrier (LCC) subsidiaries Tiger Australia and Jetstar. With this effective duopoly on the east-west route, Virgin and Qantas have been attempting to differentiate their full-service products from their LCC affiliates. 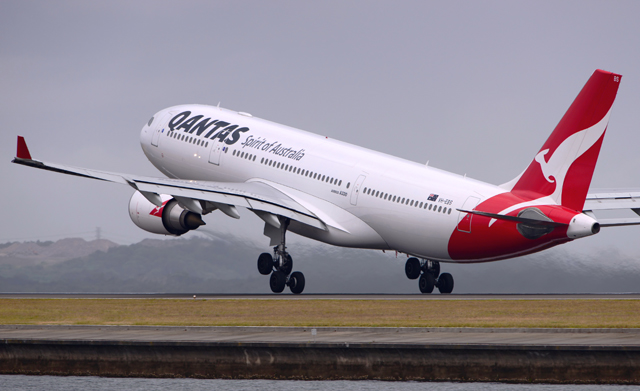 In May 2011, the then-Virgin Blue repositioned itself to gain a larger share of business and high-yield passengers, aggressively targeting Qantas’s market share. As a result, Virgin was able to offer everything from basic low-cost fares all the way up to high-end tickets offering all the usual amenities such as lounge access and business-class seating.

After closing a deal to take over Tiger Airways earlier this year, Virgin has been able to further transfer its low-cost operations to the LCC and up the service levels on its own flights. This includes implementing business-class cabins on all domestic routes and offering Lufthansa Systems’ BoardConnect solution, which allows passengers to use their own personal electronic devices to access in-flight entertainment distributed via wi-fi.

However, the fiercest competition is on coast-to-coast routes from the eastern cities of Melbourne, Brisbane and Sydney to Perth on the other side of the country. 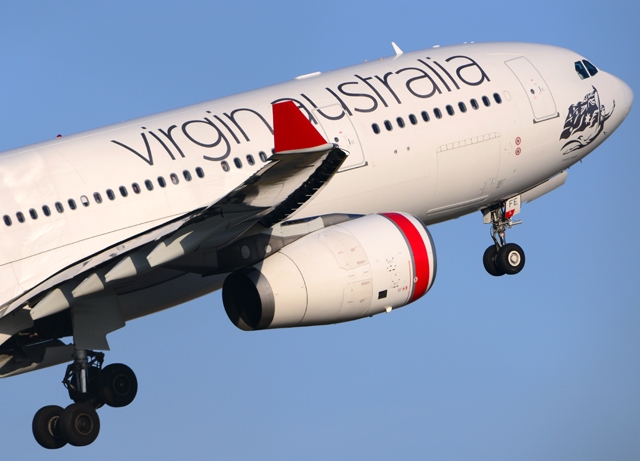 Virgin initially acquired six Airbus A330-200s to solely operate on these routes. These offer business travelers Zodiac Aerospace’s angled-flat seats with a 60in (152cm) pitch in a 2-2-2 configuration, while IFE comes courtesy of Panasonic’s Red system with 10in screen and amenities include a toiletries kit, turn-down service with blanket and pillows, and a full in-flight menu designed by Australian chef Luke Mangan.

Qantas initially lagged behind its rival in this area, with the majority of its domestic A330-200 fleet offering neither lie-flat seating nor in-seat entertainment for business-class travellers. However, the flag carrier began rolling out its new business-class product across its entire A330-200 and -300 fleet in December 2014. Significantly, the first higher-spec A330-200 debuted on an east-west route.

Qantas has selected the Vantage XL seat produced by Irish company Thompson Aero Seating, with modifications by the airline’s designer Marc Newson to incorporate its own styling and specifications.

The Vantage XL boasts pitch of 79in, 25in width and a 180° lie-flat bed. Arranged in a 1-2-1 configuration, direct aisle access is available for all passengers. IFE is upgraded to Panasonic’s eX3 system with a 16in screen, together with noise-cancelling headphones, in-seat power, USB connectivity, designer amenity kits and upgraded dining options. Compared with previous configurations, the carrier has cut the number of business-class seats in the cabin by six to eight. 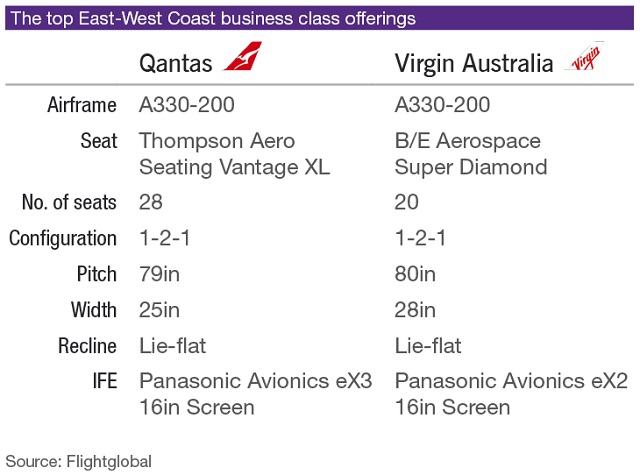 Inevitably, Virgin Australia responded. In late 2014 it unveiled its new business-class product, to be deployed across both its A330s and Boeing 777s. This adopts the same 1-2-1 configuration as Qantas, although it uses B/E Aerospace Super Diamond seats laid out in a reverse herringbone style, all offering direct aisle access.

Virgin Australia markets the product as a “Business/First hybrid”, offering passengers a higher level of privacy in the 28in-wide seats with 80in pitch. IFE options include 16in touchscreens using Panasonic’s eX2 system, USB adapters, in-seat power and enhanced onboard dining. With the roll-out of the new seating, Virgin reduced the capacity of the business-class cabin on its A330s by four seats. 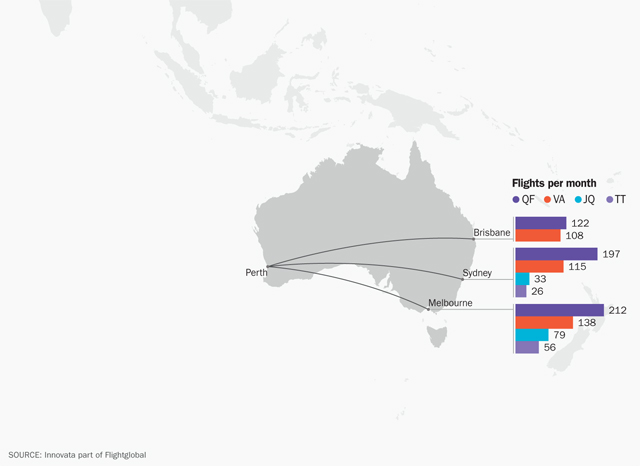 These significant investments, adding international-grade business-class offerings on flights ranging from 3h 30min to 5h in duration, do suggest that the carriers’ desire to attract high-yield fares has become somewhat all-consuming. Major Asian carriers such as Singapore Airlines and Cathay Pacific have adopted a regional business class which only offers recline seating in a 2-2-2 configuration for flights of a similar length. Demand on the Asian routes is relatively higher than Australia’s east-west flows, too.

So it seems fair to conclude that while Antipodean customers may have benefited, it is doubtful that the shareholders in either airline are sitting as comfortably.