The incursion of an Israeli-made unmanned air vehicle into that nation’s airspace from inside Syria on 17 July has provided the authorities in Washington with another reason to block future sales of such equipment to Moscow.

According to the Israeli military, the origin of the intruding UAV has not been verified, but sources suggest that it was probably a Searcher 2 designed by Israel Aerospace Industries (IAI) which was being operated by Russian forces deployed within Syria.

Two Raytheon Patriot surface-to-air missiles were launched at the UAV immediately after it was detected, but missed their target. A third attempt to shoot it down, this time using an air-to-air missile, also failed.In recent months, Washington has vetoed any proposed further sales of Israeli-made UAVs to Russia, a stance which Tel Aviv has attempted to fight due to its improved relations with Moscow.

The US authorities argue that the war in Syria may result in advanced technologies falling in the hands of Islamic State militants.Russian companies have contacted some Israeli manufacturers in an attempt to establish joint-venture agreements, but after checking with Israel's defence ministry it became clear that any such deal would anger the authorities in Washington, which must approve an export licence for any sale. 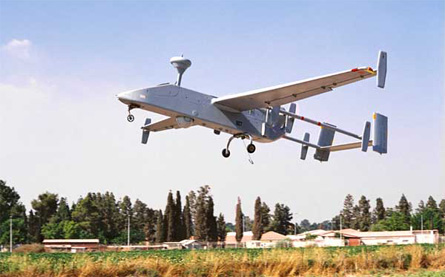 Several years ago, Russia bought 10 Searcher 2s and 30 BirdEye 450 UAVs from IAI, partially assembling them at a Russian plant. Some of the aircraft – mainly Searcher 2s - have been used by Russian military personnel in Syria.

Russian sources indicate that the combat experience gained in country has resulted in demand for more advanced UAVs, such as those manufactured by Israeli companies.