Delta Air Lines confirms some passengers or crew suffered minor injuries when one of the company's Boeing MD-88s skidded off a runway and into a raised seawall at New York's LaGuardia airport on 5 March.

"Preliminary reports indicate some minor injuries," the carrier says in a recent media update, without providing additional details. "Passengers deplaned and moved to the terminal on busses."

Delta adds, "there was a fuel leak from one of the wings".

The extent of the injuries remains unknown and hospitals near LaGuardia airport did not immediately respond when asked if they were treating passengers.

The National Transportation Safety Board says it has started investigating the accident.

News of the crash, which occurred at about 11:00 local time on 5 March, spread quickly as passengers on the MD-88 tweeted pictures of the aircraft in a nose-up attitude with its nose resting on a snowy embankment.

In one picture the aircraft's nose appears to extend over water on the far side of the embankment. 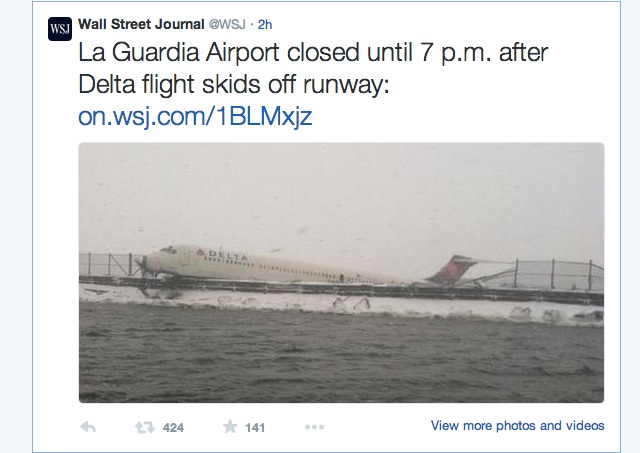 The accident happened during a snowstorm the National Weather Service says could dump 6in (15cm) and 8in on New York by 19:00 and reduce visibility to 0.25 miles (0.4km).

LaGuardia airport has reopened one of its two runways to air traffic, operator the Port Authority of New York and New Jersey (PANYNJ) says.