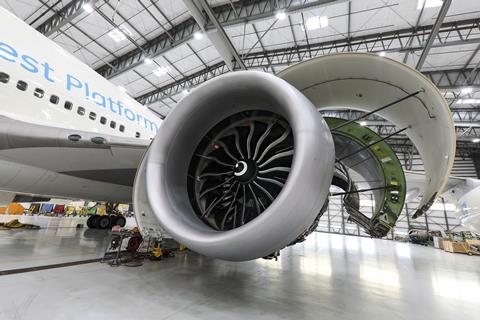 The GE9X engine is the world’s most powerful commercial aircraft engine. It is up to 10% more fuel efficient than the GE90 engine, and contains the latest generation of carbon fiber composite, Ceramic Matrix Composite and additive parts.

As one of the world’s largest suppliers of aircraft engines, systems and services, GE Aerospace continues to be an industry leader in developing technologies to reduce CO2 emissions from flight.

GE Aerospace’s newest engines are designed to offer better fuel efficiency and lower CO2 emissions than their predecessors with advances in engine architecture, aerodynamics, and advanced materials. For example, technologies such as carbon fiber composites, Ceramic Matrix Composites and additive manufacturing have led to lighter parts with higher capabilities.

Read more about these breakthrough materials and processes below.

Carbon fiber composite fan blades are higher strength and lighter weight than the traditional titanium fan blades they replaced, helping improve fuel efficiency in GEnx, CFM LEAP and GE9X engines compared to their predecessors. When the GEnx entered service in 2011, carbon fiber composite materials were expanded to the fan case, as well as the fan blades, helping the GEnx achieve up to 15% better fuel efficiency than the CF6 engine.

CMCs, another type of composite material containing silicon carbide fibers, are lighter weight than traditional material alloys and more heat resistant, allowing engines made with CMCs to operate at higher temperatures with less cooling air. The CFM LEAP engine, which entered service in 2016, was the first to contain a CMC part in the engine’s hot section and is 15% to 20% more fuel efficient than the previous generation CFM56 engine.

Unlike traditional manufacturing methods that mill or cut away from a slab of metal or use forming molds to produce a part, additive manufacturing grows parts directly from a computer-designed file using layers of fine metal powder and an electron beam or laser. The resulting part can be lighter weight and manufactured in a fraction of the time it would take using traditional methods. The ability to grow parts with additive manufacturing also allows for the elimination of joints and improvement of designs by creating a single, integrated part to replace an assembly. Conventionally-made parts could consist of multiple components.